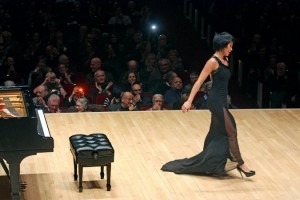 They are demanded, they delight and then they’re over, rarely to be remembered like the big concerto, sonata or symphony to which they form brief codas.

But the power of the encore, if subtle, is considerable. In the overstructured, overdetermined world of classical music, encores embody something too frequently missing: surprise. They’re among the most potent tools a concert artist wields.

“The encore should wrap up the audience’s experience of the piece you just played,” the violinist Hilary Hahn explained recently. She is putting her money where her mouth is: To address the paucity of short solo options for her instrument, she has commissioned 27 new ones in the last few years. (Her recording based on the project, “In 27 Pieces: The Hilary Hahn Encores,” has been nominated for a Grammy Award.) “You have to find something that lets people be in their own world, with its own character and sound.”

An encore can extend the mood of the written program, or subvert it. A new work can get another hearing a matter of minutes after the first. Virtuosity can be tested, unknown depths revealed. An encore can memorialize a composer — at Carnegie Hall in 2012, the pianist Pierre-Laurent Aimard movingly played the gentle “Fratribute” by Elliott Carter, who had died a couple of weeks before — or a princess.

The conductor Esa-Pekka Salonen was in London on Aug. 31, 1997, to lead the Swedish Radio Symphony Orchestra that evening at the BBC Proms. But the early morning news that Diana, Princess of Wales, had been killed in a car crash in Paris threatened to upend any cultural plans.

Nicholas Kenyon, then in charge of the Proms, said that the concert would most likely be canceled, then called back a bit later and reversed himself. Speaking by phone recently, Mr. Salonen recalled, “And then Nick said: ‘I want to double check. Have you planned an encore?’ “ Remembering the moment, he laughed ruefully. “I said, ‘Yes, actually. The “Circus Polka.” ’ ”

There was no question that Stravinsky’s playful polka would have been out of place, to say the least. Mr. Salonen and Mr. Kenyon decided to reverse the usual order of things and begin the concert, rather than end it, with an unprinted addition: the sober “Nimrod” from Elgar’s “Enigma Variations.” Not only a ruminative opportunity for the audience to mourn, but it was also a work by a British composer in the wake of an event that had left the nation in a state of stunned sadness.

The desire to listen again to something we liked the first time, or to hear more from artists we’ve enjoyed, almost certainly goes back as far as there’s been music. But the precise concept of our encore — French for “again” (though the French themselves tend to shout “bis,” Latin for “twice”) — is far newer.

The word appeared in The Spectator newspaper in 1712, when a pseudonymous satirist wrote, “I observe it is become a custom, that whenever any gentlemen are particularly pleased with a song, at their crying out ‘encore’ or ‘altro volto,’ the performer is so obliging as to sing it over again.” A few decades later, in “The Dunciad,” Alexander Pope imagines Opera telling Dullness, “To the same notes thy sons shall hum or snore,/And all thy growing daughters cry encore.”

While musicians were often called upon in the 18th and 19th centuries to give a well-received song or aria another go, this kind of literal encore eventually became a rarity, sniffed at as an indulgence. By the early 20th century, programs at the Metropolitan Opera warned, in capital letters, “Positively no encores allowed.”

That rule has had just a couple of exceptions in the Met’s modern era. Last year, when the tenor Javier Camarena sang Prince Ramiro’s aria “Si, ritrovarla io giuro” in Rossini’s “La Cenerentola” with the company, the applause was so intense and went on for so long that Peter Gelb, the Met’s general manager, gave permission for Mr. Camarena to deliver an encore if the situation repeated itself, as it were, at the following performances.

It did, and Mr. Camarena did, too, complete with shining high D’s. (Juan Diego Flórez, who followed him in the role, repeated the trick.) Far from being the kind of thing you ban, opera encores are something to be cherished in 2015, signs that singing can still summon the enthusiasm generally associated with a long-ago golden age.

While this kind of “bis” is primarily a vocal phenomenon when it still pops up, it occasionally makes incursions into instrumental music. In November, the excellent Pacifica Quartet appeared at Alice Tully Hall under the auspices of the Chamber Music Society of Lincoln Center.

Receiving warm applause at the end of the concert, the players sat down for an unexpected encore: the second movement, “Menace,” of Shulamit Ran’s “Glitter, Doom, Shards, Memory” (2012-13), which the group had played in its entirety before intermission. I wish that more ensembles would consider this, particularly in concerts featuring contemporary music that would benefit from being worked deeper into listeners’ ears.

For many, the encore is still assumed to be a shock-and-awe routine, setting aside the subtlety of the program proper for pure dazzle, heavy on virtuosic recastings of familiar melodies. The pianist Vladmir Horowitz was renowned for this, and his bonbons are still recycled today. One of the young star Yuja Wang’s five (count ’em) encores at her Carnegie Hall recital in May 2013 was Horowitz’s glittering if empty-headed “Variations on a Theme from Bizet’s ‘Carmen.’ ”

But encores can also be an opportunity for technically flawless musicians to prove their artistic bona fides. When he appeared last month with the New York Philharmonic, Daniil Trifonov, a rising Russian pianist already well known for his extraordinary fingers, was called back after Rachmaninoff’s Piano Concerto No. 1 and played Debussy’s mellow “Reflets dans l’Eau” (“Reflections in the Water”). With exceptional nuance, Mr. Trifonov made the Debussy work’s chromatic wanderings seem like outgrowths of the concerto.

Though Ms. Hahn has begun working her new commissions into her encore repertory, she still frequently returns to Bach when she is brought back onstage. But she reserves the right to switch things up at the last moment.

“The concerto, you’ve committed to two years in advance,” she said. “The encore, you can change that day.” She went on: “Occasionally I’ve been sure I’ll do a Bach Gigue, and then I’ve finished the concerto, and it doesn’t quite feel right in the hall and I’ll do a Sarabande. It’s nice to be able to read the hall like that.”

Sometimes audiences don’t demand encores at all; Prokofiev’s Violin Concerto No. 1, Ms. Hahn said, ends so quietly that the applause can be muted even for a brilliant performance.

One of my most memorable encore experiences was a rare occasion when there wasn’t one. Last April, the young pianist Gilles Vonsattel appeared in the intimate environs of Bargemusic in a demanding program of Beethoven, George Benjamin, Liszt, Messiaen, Heinz Holliger and Frederic Rzewski, exhausting for player and audience alike.

Closing with Rzewski’s raucous, intense “Winnsboro Cotton Mill Blues,” Mr. Vonsattel was greeted with applause strong enough to bring him back for another bow. Then, somehow, everyone seemed to know that it was proper to stop clapping. As I wrote then, the fact that the crowd didn’t demand an encore was the greatest praise it could have given.

Once granted, encores can also go awry. Mr. Salonen said that early in his career he had experimented with leading a brief, enigmatic movement of Webern’s Five Pieces for Orchestra after the ovation that followed Mahler’s grand Seventh Symphony.

“On some level there is very solid logic behind it,” he said. “Webern has both the mandolin and guitar in his little orchestra, as does Mahler, and in a way Webern is the next stage of late German Romantic music. But it really bombed every time I tried it.”

It was just such a bomb that Ms. Hahn feared when an audience member suddenly called out a request after one of her concerts: Heinrich Ernst’s notoriously demanding arrangement of Schubert’s “Erlkönig.”

“I thought, ‘I never get shout-outs,’ ” she recalled. “It’s like someone shouting ‘Free Bird’! But I hadn’t played it for a year. I went out and did it and got through it, and it was fine. Not every day would I conclude that I could do it. But it was worth the risk.”

Mr. Salonen, too, has survived a brush with a concertgoer with specific ideas about how he should finish a performance.

It was in Ferrara, Italy, after a long program, when he announced to the audience an imminent encore. Somebody in the balcony shouted: “It had better be short! My bus is leaving.”

Mr. Salonen, switching from a longer piece he had planned, was only too happy to oblige.