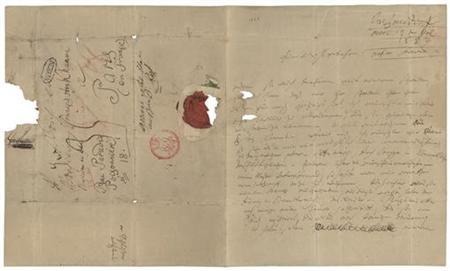 A rare handwritten letter by German composer Ludwig van Beethoven complaining about illness and a lack of money has turned up at a northern German institute as part of a bequest, causing excitement among lovers of the musical genius.

The Brahms Institute in the northern city of Luebeck said the six-page letter bearing the composer’s signature and original seal was, in essence, an attempt to sell his well-known “Missa solemnis” mass which he completed in 1823.

In the letter, Beethoven asks harpist and composer Franz Anton Stockhausen to help find advance buyers for the mass.

But most striking are details about his personal circumstances, such as his financial concerns, an eye disorder and an attempt to track down a music-loving dentist who wrote to him, said Stefan Weymar, music researcher at the institute.

“My low salary and my illness demand efforts to make a better fortune,” said Beethoven in the letter, which has turned yellow with age and needs to be stored in special conditions and handled with gloves.

Beethoven, 53 at the time of writing, went on to say that the education of his nephew was costly and that the boy would need support after his death.

The black writing, which slopes to the right, looks messy and is marred by corrections and crossings out.

“Beethoven was not a composer with beautiful handwriting. It is spontaneous and he wrote things, then crossed them out, his thoughts changed as he went on and that is the impression the letter gives,” Weymar told Reuters.

At the end, he wrote “all letters to me need nothing more than “To L. v. Beethoven in Vienna,” where I receive everything.”

The missive ended up in the hands of music teacher Renate Wirth, a descendant of the recipient.

“The bequest is of extraordinary historic value — a piece of luck for the Brahms Institute. The value of the Beethoven letter is valued at over 100,000 euros ($127,400),” said Institute head Wolfgang Sandberger.

Born in the western German city of Bonn in 1770, Beethoven moved to Vienna as a young musician and become one of the most celebrated composers of all time, straddling the classical and romantic eras. His deafness in later life makes his musical accomplishments all the more astonishing.

Beethoven died in 1827, four years after the letter was written, and is buried in Vienna.

His Moonlight Sonata for the piano and dramatic four-note opening to his Fifth Symphony are among the best known pieces of classical music ever written. His Ode to Joy, part of the Ninth Symphony, has been adopted as the EU’s Anthem of Europe.

“The appeal of a letter handwritten by Beethoven is certainly very great,” Michael Ladenburger, head of the Beethoven House museum in Bonn, told Reuters.

That appeal is reflected at auctions — a shopping list with just six words on it was auctioned for 60,000 euros last year.

“His letters are rare and the length of this one, with the insight it gives into his personal life, make it very interesting indeed,” said Ladenburger.

The Brahms Institute will put the letter on show from next week.