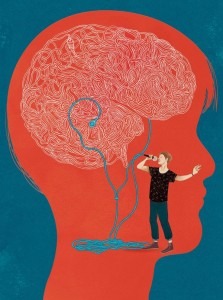 Whether to enliven a commute, relax in the evening or drown out the buzz of a neighbor’s recreational drone, Americans listen to music nearly four hours a day. In international surveys, people consistently rank music as one of life’s supreme sources of pleasure and emotional power. We marry to music, graduate to music, mourn to music. Every culture ever studied has been found to make music, and among the oldest artistic objects known are slender flutes carved from mammoth bone some 43,000 years ago — 24,000 years before the cave paintings of Lascaux.

Given the antiquity, universality and deep popularity of music, many researchers had long assumed that the human brain must be equipped with some sort of music room, a distinctive piece of cortical architecture dedicated to detecting and interpreting the dulcet signals of song. Yet for years, scientists failed to find any clear evidence of a music-specific domain through conventional brain-scanning technology, and the quest to understand the neural basis of a quintessential human passion foundered. Full story.