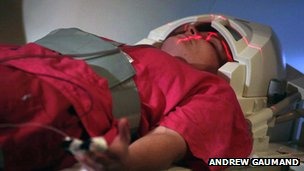 Listening to new music is rewarding for the brain, a study suggests.

Using MRI scans, a Canadian team of scientists found that areas in the reward centre of the brain became active when people heard a song for the first time.

The more the listener enjoyed what they were hearing, the stronger the connections were in the region of the brain called the nucleus accumbens.

The study is published in the journal Science.

Dr Valorie Salimpoor, from the Rotman Research Institute, in Toronto, told the BBC’s Science in Action programme: “We know that the nucleus accumbens is involved with reward.

“But music is abstract: It’s not like you are really hungry and you are about to get a piece of food and you are really excited about it because you are going to eat it – or the same thing applies to sex or money – that’s when you would normally see activity in the nucleus accumbens.

“But what’s cool is that you’re anticipating and getting excited over something entirely abstract – and that’s the next sound that is coming up.”

To carry out the study, which took place at the Montreal Neurological Institute at McGill University, the scientists played 19 volunteers 60 excerpts of new music, based on their musical preferences.

As they were listening to the 30-second-long tracks, they had to the opportunity to buy the ones they liked in a mocked up online music store.

All of this was carried out while the participants were lying in an MRI machine.

By analysing the scans, the scientists found that the nucleus accumbens was “lighting up” and depending on the level of activity, the researchers could predict whether the participant was likely to buy a song.

Dr Salimpoor said: “As they are listening to this music, we can look at their brain activity and figure out how they are appreciating or enjoying this music before they even tell us anything.

“And that’s part of this new direction that neuroscience is going in – trying to understand what people are thinking, and inferring their thoughts and motivations and eventually their behaviour through their brain activity.”

The researchers found that the nucleus accumbens was also interacting with another region of the brain called the auditory cortical stores.

This is an area that stores sound information based on music that people have been exposed to before.

“This part of the brain will be unique for each individual, because we’ve all heard different music in the past,” explained Dr Salimpoor.

The researchers now want to find out how this drives our music tastes, and whether our brain activity can explain why people are drawn to different styles of music.
Rebecca Morelle (BBC News) / April 12, 2013