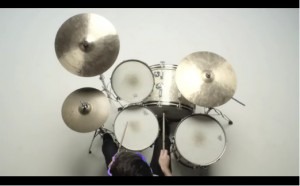 An old musician’s joke goes “there are three kinds of drummers in the world—those who can count and those who can’t.” But perhaps there is an even more global divide. Perhaps there are three kinds of people in the world—those who can drum and those who can’t. Perhaps, as the promotional video above from GE suggests, drummers have fundamentally different brains than the rest of us. Today we highlight the scientific research into drummers’ brains, an expanding area of neuroscience and psychology that disproves a host of dumb drummer jokes.

“Drummers,” writes Jordan Taylor Sloan at Mic, “can actually be smarter than their less rhythmically-focused bandmates.” This according to the findings of a Swedish study (Karolinska Institutet in Stockholm) which shows “a link between intelligence, good timing and the part of the brain used for problem-solving.” As Gary Cleland puts it in The Telegraph, drummers “might actually be natural intellectuals.” Full story.