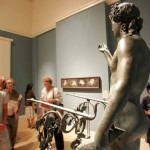 Have you been noticing a growing number of empty seats at classical concerts in recent years? Have you attended a recent gallery opening where there was actually enough Champagne and hors d’oeuvres to go around — and perhaps even some to take home?

If so, your imagination isn’t playing tricks on you.

A new report released by the National Endowment for the Arts said that the number of American adults attending arts and cultural events has sunk to its lowest level since 1982, which was when the NEA began conducting the poll.

The study, which was organized in partnership with the Census Bureau, noted that the downward trend was at least partially due to the deteriorating economic conditions of the last two years, including the rise in the price of gasoline and an overall drop in consumer spending.

But it also emphasized larger shifts in the American public’s relationship to the arts. The report, which uses data collected in 2008, said that the share of adults who attended at least one arts event was 34.6%, down from 39.4% in 2002, which was the last time the survey was conducted.

Moreover, those who did attend arts events did so less frequently. The report found that the average number of attendances per individual was 5.2 in 2008, down from 6.1 in 2002.

Among the types of arts events that the report measures are museum shows, classical music concerts, opera, ballet, theater and jazz concerts.

The NEA released preliminary results of the report in June. The full report, which was made public today, includes data by state and region. California ranked near the top among states for art museum attendance. In 2008, 31% of the state’s residents — more than 8 million people –visited an art museum or gallery.

Overall, the Pacific and New England regions ranked high in the attendance of performing arts and visual arts events, according to the report.

“The 2008 survey results are, at a glance, disappointing,” said Sunil Iyengar, the NEA’s director of research and analysis, in a summary of the report.

He said a single survey cannot explain all the reasons for the nationwide decline, but noted that among the possible causes is decreasing arts education.

The report shows that since 1982, the number of 18-to-24-year-olds who said they had any music education in their lives has declined by more than a third. For visual arts education, the number has decreased by a half.

One of the most surprising findings in the report was that people ages 45 to 54 — who have historically been a significant component of arts audiences — showed the steepest declines in attendance for arts events. Only 36% of those in this age group attended an arts event in 2008, versus 46% in 2002.

The survey also showed that college-educated adults cut back on their consumption across nearly all art forms.

When analyzed by gender, the data showed that females outpaced males in attendance across most of the arts — the exceptions being jazz and Latin music events.

The full report is expected to be accessible on the NEA’s website today. You can also tune into a webcast of a conference at which arts leaders from around the country will discuss the results.

The webcast is scheduled to begin today at 11 a.m. Eastern time.