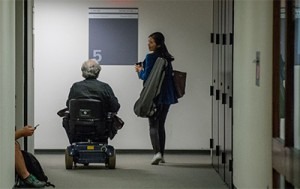 ‘I had to actually prove more, with greater intensity, that I was a genuine article as far as my music was concerned,’ said the violinist Itzhak Perlman, who contracted polio when he was 4.
CRAIG WARGA FOR THE WALL STREET JOURNAL

At a New York Festival of Song concert in November, the organization’s artistic director and co-founder, pianist Steven Blier, zoomed onto the stage in his battery-operated wheelchair.

“This takes a minute, so study your program notes,” Mr. Blier said to the audience as co-founder Michael Barrett held a piano chair for him to slide into, and then tucked the wheelchair away.

Mr. Blier launched into a program he dubbed “Art Song on the Couch,” connecting late 19th- and early 20th-century German songs with the ideas of Sigmund Freud.

Mr. Blier, who has a degenerative muscular disease called facioscapulohumeral muscular dystrophy, is one of three New York-based classical musicians with coming concerts who have navigated substantial careers despite significant health challenges. The careers of these musicians illustrate the difficulties, decisions, discrimination and even advantages that occur when health intersects with the physical demands of being on stage.

“A performing musician has to deal with these issues in a public forum, in a way the average person doesn’t,” said Joseph Straus, a music-theory professor at the CUNY Graduate Center and author of the book “Extraordinary Measures: Disability in Music.”

“It’s a distillation and heightening of what any person with a visible disability does every time they step out their front door,” he said.

Renowned violinist Itzhak Perlman , who on Wednesday will give his first solo recital in New York in seven years, has dealt with these issues for most of his life. He contracted polio at age 4, and at least early in his career people focused more on what they saw—a child with crutches—than heard, he said.

“I had to actually prove more, with greater intensity, that I was a genuine article as far as my music was concerned,” said Mr. Perlman, 69 years old.

As the violinist’s career skyrocketed, his perspective on disability changed. Mr. Perlman shifted from despising what he refers to as the “Crippled Violinist Plays Concerto” headlines to advocating for people with disabilities of all kinds, especially with regard to accessibility.

But it isn’t always easy, even for a well-known violinist who zips around on an electric scooter faster than his two leg-bound companions can walk. “Just recently, I was sitting on a plane, and the flight attendant asked my wife if I had a chair,” Mr. Perlman said. “This person did not talk to me because I was the problem. People think if you’re in a chair, you have a problem digesting information.”

The cellist Alisa Weilerstein, 32, who solos with the New York Philharmonic this week, was diagnosed with Type I diabetes at age 9. She began playing professionally at 14 but made a conscious decision not to tell her manager about her condition.

“I didn’t want them to think there was anything I couldn’t do,” she said.

These days, Ms. Weilerstein’s diabetes is under control because she assiduously manages it, testing her sugar about eight times a day and wearing an insulin pump, which is inserted into her abdomen with a catheter. When performing, she wears the pump in what she calls her “Bond Girl pouch,” hidden under her dress.

Mr. Blier, 63, hasn’t always used a wheelchair. His muscular dystrophy is progressive, so he has, until several years ago, used a cane. And while it has made some things hard, there have been silver linings, he said, like the way that being forced to relearn elements of piano technique has made him a better teacher.

While he has accompanied well-known singers such as Renée Fleming and Susan Graham, he counts his muscular dystrophy as partially responsible for focusing his career toward New York Festival of Song, which presents thematic recitals and is, he said, his personal passion.

“I had set out to play for the big names of the day, and I did,” Mr. Blier said, “but I honestly find what I’m doing now much more fascinating.”

Certain common threads connect the musicians. Most were frustrated with media coverage early in their careers, which focused on health or disability.

“I was simply a musician, and I wanted the articles to be about music,” said the percussionist Evelyn Glennie, 49, who is profoundly, or nearly entirely, deaf.

Yet the musicians interviewed, by a certain point in their career, became not only comfortable talking publicly about health, but now use their status as an advocacy tool.

This ranges from Mr. Perlman’s high-profile speeches at polio fundraisers to Ms. Weilerstein’s conversations with families whose children have recently been diagnosed with diabetes. The saxophonist and Prism Quartet executive director Matthew Levy, 50, who has tinnitus, which causes phantom sounds, including ringing, in the ears, gives presentations about tinnitus and other playing-related injuries to high-school students.

Many musicians spoke of the need to be overprepared. “It’s what black people say, it’s what Asian people say,” said the mezzo-soprano Laurie Rubin, 36, who is blind. “You have to be better than the average white person, because people are going to put you in that sort of box.”

Those with physical disabilities are bound to meticulous logistical planners of everything from accessible concert halls to transportation to bathrooms.

And then there is discrimination, which shows up in subtle, and less than subtle, ways.

“My manager says, ‘There are so many conductors who won’t even hear you because they know you’re blind,’” said Ms. Rubin, who is also co-founder of Ohana Arts, a performing-arts festival in Hawaii.

Added Mr. Blier, “I’m quite sure there are a lot of gigs I just don’t get asked to do, because everything has to be arranged very carefully.”

Musicians spoke of strong support networks, from spouses to, in Mr. Perlman’s case, his parents, to artistic collaborators.

At the conclusion of that New York Festival of Song concert, for example, Mr. Blier’s fellow pianist, Mr. Barrett, didn’t stand up to bow in the usual fashion. Instead, the two singers and Mr. Barrett gathered around the seated Mr. Blier in a kind of a group hug.

Violinist Itzhak Perlman, who contracted polio at age 4, discusses his and others’ shifting attitudes toward his disability ahead of a solo recital Dec. 3 at Lincoln Center’s Avery Fisher Hall. Photo: Craig Warga for The Wall Street Journal