Media
Musicians may be most creative ‘when not actually playing instrument’
June 20th, 2014
Tags: research 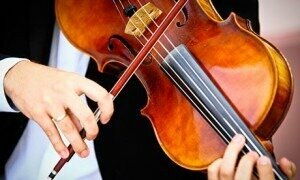 A musician plays a viola. Researchers found that breakthrough moments often happened when players were humming to themselves, not when playing their instrument. Photograph: Alexandru Nika / Alamy/Alamy

For a musician, it’s an elusive question: where to find your muse? How to unlock your creative voice? Well, putting down the instrument and just tapping the furniture or singing badly in the shower might help.

New research suggests that musicians may be at their most creative when they are not playing their instrument or singing. By studying musicians and asking them when inspiration struck them, researchers found that breakthrough moments often happened when players were humming to themselves or tapping out rhythms on the table or imagining dance moves inspired by the music.

“What we are finding is that even fairly mundane activities can feed in to the discovery of new insight, new knowledge and new means of expressing ideas in all sorts of ways,” said John Rink, professor of musical performance studies at Cambridge University. “The potential is infinite.”

Rink led a team of researchers who carried out field work at the Guildhall School of Music and Drama and the Royal College of Music, using interviews, questionnaires, focus groups and filming one-to-one lessons.

They talked to students about when they felt particularly creative or when something new emerged about their understanding of a piece – described by the team as creative episodes.

One horn player was filmed undertaking private practice. Watching it back he identified 34 creative episodes, 23 of which took place when he was not using his instrument – it was when he was humming, tapping on a table, gesturing, whistling and conducting himself. “All of this helps to embed the music in one’s mind,” said Rink.

He said creativity was important even if you were following a score.

“The standard assumption has been that the composer composes, the performer transmits and the listener receives and that chain of communication is now being very seriously questioned by musicians and musicologists alike – we are regarding the performer as a creative agent, as a co-creator rather than simply a transmitter of what the composer has pre-ordained.”

The team found four key ingredients to achieving creative expression in performance. These are freedom, flexibility, a sense of being in the moment and a commitment to “giving” the music to an audience, even if that audience only exists in the musician’s imagination.

Rink said one possible barrier which might limit a musician’s search for creativity was feeling that they needed to respect the score and the composer who wrote it. “There is a perceived hierarchy in which the composer is deemed to be of much greater importance than the mere executant,” he said.

The researchers concluded that musicians began to make a piece their own when they felt free and flexible enough to be spontaneous and take risks rather than simply rely on external validation from, say, a teacher.

Having said all that, Rink said there was no magic formula for unlocking creativity. It would not just happen.

“Developing a creative voice takes time,” said Rink. “It takes experimentation, patience and there may be no predictable course of development that one can expect to follow. You never really know when creative insight will be achieved or how to get it but prolonged consideration, trial and error and concentration are all very much part of it … it is a lifelong journey. It never really ends.”

The project is one of the research initiatives launched by the AHRC ResearchCentre for Musical Performance as Creative Practice, a collaboration between the universities of Cambridge and Oxford, King’s College London and Royal Holloway, and funded by the Arts and Humanities Research Council. It has made a YouTube film about its research and a book will be published in 2015.