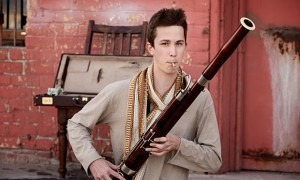 Save the Bassoon wants to encourage young musicians to take the instrument up.
Photograph: Alamy

It is widely understood that lions, pandas and polar bears are all in serious jeopardy … The fact that bassoons now share this endangered status may come as more of a surprise, but this summer the reed instrument has become a strong candidate for international protection, according to fans of the sound of the symphony orchestra.

A campaign called Save the Bassoon now aims to remind the public of the importance of this engaging member of the woodwind section and to encourage young musicians to take it up. Using the “endangered species” model employed by the World Wide Fund for Nature, campaigners are highlighting the scarcity of bassoonists and paving the way for the promotion of some other orchestral instruments that are under threat, such as the oboe, French horn, viola, trombone and double bass. Full story.