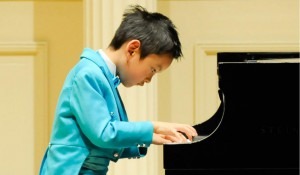 Recently, Yuanfan Yang has been busy preparing for his upcoming Scotland tour, learning Chopin’s Fantasie in F minor and piano sonatas by Beethoven and Rachmaninov, respectively. Then there’s Rachmaninov’s third piano concerto and Prokofiev’s first piano concerto, which he’s learning for engagements in China. Oh, and Yuanfan is 17 years old.

“I started playing the piano aged six,” says Yuanfan, who was born in Edinburgh to Chinese parents. He reports practising a lot as a child, for no reason other than that he enjoyed it. Now also a composer – his first piano concerto will be premiered in China later this year – as well as a BBC Young Musician piano winner, Yuanfan is clearly not just a technically brilliant player but also a talented artist.

In the category of the extremely talented, Yuanfan has got plenty of youthful company. “Musicians are doing more advanced things at a younger age than ever before,” says Yoheved Kaplinsky, a professor of piano at The Juilliard School in New York and head of its pre-college division. “It’s the Olympic syndrome: records exist in order to be broken.” Wanting to better the accomplishments of others is, of course, part of human nature, but thanks to this collectively competitive streak societies have advanced through the centuries. And now, Olympic-style music. “Today kids are recording the Chopin études at age 10,” reports Kaplinsky. “When I was young, nobody played them until they were adults.”

Welcome to the awe-inspiring age of young Mozarts who rattle off Chopin’s tricky études as well as entire piano concertos. “Canada’s piano superstar is eight years old,” proclaimed the Canadian Broadcasting Corporation (CBC) earlier this year. The superstar in question, Kevin Chen, has already passed the country’s piano teacher exam and is currently studying at the Royal Conservatory of Music. Five-year-old Ryan Wang, a fellow Canadian pianist, has performed at Carnegie Hall. Ten-year-old pianist Laetitia Hahn has been delighting German concertgoers with her Chopin and Beethoven for over three years. British nine-year-old Alma Deutscher started playing the piano at two and the violin at three and now composes operas, having acquired an early taste for the trade by writing Nokia ring tones. Conservatories in Europe and North America report an increasing number of pre-teens who turn up for auditions flawlessly performing repertoire previously considered the domain of 25 year olds.

The trend is most obvious for the piano, though string players, too, are showing impressive skills at an ever-younger age. In a nod to the youthful trend, the prominent Van Cliburn piano competition recently announced that it will add contests for 13- to 17-year-olds. The American Protégé competition already features a category for players aged six to 10 years old, and next year New York’s Kaufman Center will hold its second International Youth Piano Competition, open to players aged seven to 17.

Like Yuanfan, many of the young virtuosos are Chinese or of Chinese origin. “Today, most young musicians winning competitions are Asian,” notes Murray McLachlan, Yuanfan’s teacher at Manchester’s famous Chetham’s School of Music. “They dominate music-making at both the school and the conservatory level.”

With China reportedly having 30 million young pianists, the fact that a number of them are winning competitions may not be surprising. But, says McLachlan, himself an acclaimed performer, Chinese children succeed at the keyboard because their families value the work ethos that piano playing provides. An increasing number of Chinese prodigies attend European and American music schools and conservatories.

There have, of course, always been prodigies. Six-year-old Wolfgang Amadeus Mozart not only dazzled 18th-century dukes and monarchs with his skills on the keyboard and the violin, but already had several compositions under his belt as well. Daniel Barenboim, the Argentinean-born pianist, performed in Vienna aged eight, while Anne-Sophie Mutter, the German violinist, made her international debut as a 13-year-old. But they were true prodigies, young musicians who combined technical brilliance with promising artistry. Today, by contrast, there are so many young star performers that age alone seems to mark their value. Would Kevin be performing on the CBC, and Alma on The Ellen DeGeneres Show, if they were 15 or even 10 years old? “The danger is that we’re creating machines that can play any piece at any speed,” reflects Gabriela Montero, the celebrated Venezuelan pianist and improviser, who was herself a child prodigy.

For some, age has become a downwards race. “It’s a worrisome trend because it highlights early achievement rather than substance and artistry,” says Kaplinsky. “I see 16-year-olds who are lamenting the fact that they haven’t performed at Carnegie Hall yet.” But the age race is hardly surprising: it’s much easier to measure years than artistry, and it makes for better headlines. On a recent visit to China, one leading impresario listened to ­s­everal young virtuosos seeking European concert representation, among them a nine-year-old. Against such competition, a 10- or 11-year-old almost seems like a loser.

In the 1996 film Shine, Geoffrey Rush plays David Helfgott, a teenage British pianist who buckles under immense pressure to succeed and suffers a mental breakdown. That’s an extreme result, but prodigies don’t always go on to great success as adult artists. In fact, childhood success has little impact on a musician’s career.

“Early accomplishment means nothing in the long run,” reports Kaplinsky. “Child musicians delight audiences because it’s fun seeing somebody so young doing so much, but some of them burn out.” That may provide some consolation – or Schadenfreude – to the 16-year-olds who’ve yet to play Carnegie Hall or London’s Southbank Centre.

Yuanfan, already the winner of several piano competitions, has safely made the leap from prodigy to established artist. “You need to look at technique in perspective,” he reflects. “It’s just something that helps you achieve your artistic goals.” But for those who lack artistic goals and have simply mastered the technique to wow parents, teachers and audiences, the fall from child star to teenager will cause anguish along with anger at mums and dads who took their tiger-­parenting too seriously.

The proof of the real talent of prodigies like Kevin, Ryan, Laetitia and Alma, then, is whether they’ll blow audiences away with their performances in 20 years’ time. Mozart’s career is the stuff of legend, and Barenboim – now also a conductor – remains a Titan of the music world, as does Mutter.

“The transition from child prodigy to adult artist is a very difficult one”, says Montero, who made her concert debut aged eight but gave up playing the piano 10 years later. “As an artist you have to say something to say, but you don’t have anything to say if you’ve spent your life in a practice room.” Armed with life experience and an artistic voice, Montero returned to the keyboard aged 20.

Andrew Cleary, Director of Music at Christ’s Hospital, a prestigious boarding school outside London that has seen an increase in 13-year-old applicants performing conservatory-level r­epertoire, argues that more advanced players can serve as an inspiration to less proficient ones. Besides, he adds, being able to perform certain pieces doesn’t make one a good ensemble player, and what’s music about if not performing together?

Kaplinsky says that conservatories should support early achievers only if they exhibit artistic potential as well. “We’ve had kids come in to audition and play note-perfect, but we felt there was a musical vacuum behind their performance and didn’t offer them admission,” she reports. Similarly, Juilliard occasionally offers a place to a young musician who’s not technically brilliant but who shows artistic potential.

Nevertheless, with nine-year-old virtuosos now run-of-the-mill, future prodigies may have a harder path to The Ellen DeGeneres Show. Most musicians would agree with Montero, who calls musical performances without personal interpretation simply a “numbers game of faster and younger”. “Obviously musicians have to work hard, and the younger the better, says McLachlan, “but the main thing is to be in love with music.” There is, in other words, still hope for those 14-year-old stragglers.