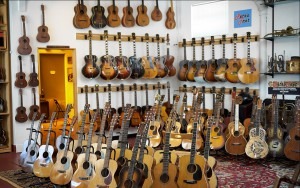 Inventory at Retrofret Vintage Guitars in Brooklyn, N.Y., includes more than 1,600 instruments such as acoustic and electric guitars.
RETROFRET/ASLAENDER

The Returns Can Be Uplifting, but Beware of the Pitfalls

People who collect musical instruments flirt with one of the great pitfalls of investing—the intermingling of financial judgment with emotion. A beguiling violin or guitar can play to the buyer’s heart, if not soul, in a way that few stock certificates, bonds or hog bellies ever will.

So, investors should consider themselves warned. Having said that, it’s also true that collecting instruments can benefit the portfolio of a knowledgeable and disciplined investor. As a hard asset, instruments can help diversify a portfolio. High-quality instruments generally hold their value well, providing some downside protection. And many have the potential for significant long-term appreciation.

The challenge is finding the particular instruments that fill that bill and are within the investor’s budget. The market for vintage and collectible musical instruments is vast and diverse, really a collection of smaller markets. It spans everything from multimillion-dollar violins, cellos and violas from the 17th and 18th centuries to $300 acoustic guitars from the 20th century.

Violins are among the most stable investments in musical instruments. Since the financial crisis, the market for violins has performed similarly to those for other hard assets. “The higher end has gone up quite a lot in the last five years, despite the economic downturn,” says Frederick W. Oster, the proprietor of Frederick W. Oster Fine Violins in Philadelphia. “I think people turned to them as an alternative asset.”

One of the most notable violins Mr. Oster is offering was made by Joseph Guarnerius filius Andreae, who lived from 1666 to 1739 or 1740 in Cremona, Italy, and is the father of the even more famous Joseph Guarnerius, known as del Gesù, a violin maker regarded as second in greatness only to Antonio Stradivari. Mr. Oster expects the instrument, which is offered on consignment as part of an estate sale, to sell for “a million dollars plus.” Ten years ago, the same violin probably would have fetched about $500,000 to $600,000.

Violins made in Cremona during the city’s golden age of violin making, around 1650 to 1750, are the most highly regarded violins among players and collectors. They are plentiful enough to have a track record, so sellers and buyers have sufficient sales records upon which to base prices.

Beyond sales data, Mr. Oster says dealers rely on their eye and their knowledge of history, as well as experience in literally handling lots of instruments, to make their pricing decisions. They also use a technology called dendrochronology, to date the wood used in instruments. That can identify some cases of fraud, but it can’t, on its own, protect buyers from replicas or overly restored instruments made with vintage wood.

Mr. Oster says buyers need to be educated about instruments to make informed decisions and to satisfy themselves that they are buying an instrument that they know to be correct, in good condition and from a reliable source, even if they are relying on expert opinion as well. Auctions can be a good source of information, but prices, which tend to get a lot of attention in the media, aren’t always a good gauge of values in the broader market.

Guitars can be more of an adventure.

“The guitar market tends to be a little bit more fad oriented,” says Steve Uhrik, the owner of Retrofret Vintage Guitars in Brooklyn, N.Y. “Collecting musical instruments is a mixed bag. I have been doing this since the early 1970s, and you can really get burned.”

His inventory includes more than 1,600 instruments,from acoustic and electric guitars to banjos, mandolins, harmonicas and pochette violins—diminutive fiddles that take their name from the French for a small pocket.

The market for solid-body electric guitars soared during the 1990s and early 2000s. But prices for many collectible electric guitars dropped about 30% during the financial crisis and haven’t really recovered. And if they do, Mr. Uhrik warns, don’t expect too much: “There has been a steady climb in prices, but if the market goes crazy, it will not continue at that rate.”

One big factor in the price of any given instrument is how close the guitar is to its original condition. A seller recently brought Mr. Uhrik a Telecaster, a solid-body electric guitar from the 1950s. “It was nice looking and it played great,” he says. But when he inspected it under ultraviolet light, he could see that the decal with the logo had been replaced. That cut the value by 25%. “It’s probably a $15,000 guitar, not a $20,000 guitar,” he says.

The market for acoustic guitars is different, because people can’t mix and match parts from different guitars and because of the rarity of the guitar’s wood, now often regulated, Mr. Uhrik says. “That market may have flattened, but it didn’t really go down. The most well-made and best-sounding guitars have held their value.” At the top of the acoustic-guitar market, older Martin D-45s, which are extremely rare, sell for hundreds of thousands of dollars.

For collectors who only have a few hundred dollars to invest, there’s still a thriving market. Frankie Basile, of Hopewell, N.J., has a passion for country blues, and has several dozen instruments, many of them acoustic guitars from the early 20th century. He has purchased old Harmony and Stella guitars, which often sell for around $300. “Stellas went through an infatuation phase, but now they have contracted a bit,” he says.

Mr. Basile says he used to buy more-expensive acoustic guitars, but he decided that the country blues he loves didn’t sound quite right when he played them on those instruments. “The guitars that I now collect have the same voice as the music,” he says.

Whether the market is high-end violins or acoustic guitars, the key to successful investing is to buy instruments that you like and that you understand, according to Mr. Oster. Buyers also have the satisfaction of playing them or lending them out musicians, he says: “They are a part of musical history, but they still can be used and enjoyed.”