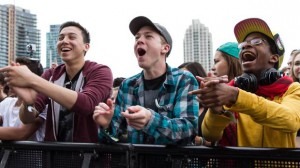 The crowd cheers on a band at Field Trip, a two-day summer festival in Toronto.
(Lucia Graca)

If a Pygmy sings in a Congolese rainforest, will a Montreal hipster listening to a Pygmy audio clip feel his joy?

The answer should be yes, according to the “music is a universal language” cliché. But in fact, whether music makes us feel happy or sad has a lot to do with our cultural background, according to a study published today in the journal Frontiers in Psychology. On the flip side, however, people from radically different cultures may have consistent physiological responses to music, the study found. High-pitched melodies and up-tempo beats result in sweatier palms, faster breathing and increased heart rate in both Pygmy and Canadian listeners, noted study authors from McGill University, Université de Montreal and the Technische Universitat in Berlin.

Unlike a taste for, say, death metal or Indonesian gamelan music, physiological responses to music appear to cut across cultures – and may be instinctive, said co-author Stephen McAdams, who studies auditory perception and cognition in musical listening as a professor at McGill’s Schulich School of Music.

Research suggests there are “certain acoustic cues in the environment that we have been genetically endowed to respond to in preparatory ways,” he said. “It seems that fast tempo and high pitches and bright timbers tend to do that.”

But in the study, conducted in the Congolese rainforest and in Montreal, that’s where similarities in participants’ responses to music dwindled.

The study involved 40 musicians in Montreal who had never listened to Pygmy songs and 40 Mbenzélé Pygmy singers who were unfamiliar with Western music and had no access to radio, television or electricity.

Both groups listened to sound clips of Pygmy songs as well as Western music including orchestral pieces and excerpts from popular films (Psycho, Star Wars and Schindler’s List). During the listening sessions, researchers measured changes in heart rate, breathing and skin responses, as well as physiological signs of smiling or frowning. The listeners, meanwhile, used touchscreens showing emoticons with smiling or frowning faces at each end of a continuum to report whether the music made them feel excited or calm, good or bad.

The Canadians described themselves as feeling a much wider range of emotions in response to Western music than the Pygmies reported while listening to either their own or Western music.

This may illustrate the huge difference in the role of music in each culture, McAdams said. In the West, a beleaguered cubicle worker might come home and crank up some happy tunes to feel better, or put on a piece of melancholy music “and sort of wallow in it,” McAdams said.

But depressing music has no place in Pygmy culture, he said. Whether they are singing to mark a birth, a burial or the start of a dangerous hunt, their music “is always kind of upbeat and positive,” he said. For the Pygmies, the forest “is like Mother Earth,” McAdams explained. Any kind of negative emotion may be perturbing to the forest, “so they’re always trying to evacuate those negative emotions with upbeat music,” he said.

He added that in Pygmy culture, the point of music “is to harmonize everything,” whereas in the West, “we sit around in a corner with our iPods on, listening to everything by ourselves.”

At least we have Mozart and Brahms – or Moby and Beyoncé – to keep us company.