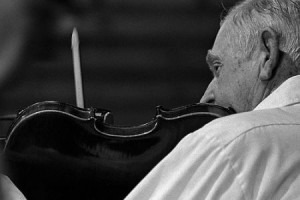 Aging-related hearing loss is not set in stone, study finds

EVANSTON — Age-related delays in neural timing are not inevitable and can be avoided or offset with musical training, according to a new study from Northwestern University. The study is the first to provide biological evidence that lifelong musical experience has an impact on the aging process.

Measuring the automatic brain responses of younger and older musicians and non-musicians to speech sounds, researchers in the Auditory Neuroscience Laboratory discovered that older musicians had a distinct neural timing advantage.

“The older musicians not only outperformed their older non-musician counterparts, they encoded the sound stimuli as quickly and accurately as the younger non-musicians,” said Northwestern neuroscientist Nina Kraus. “This reinforces the idea that how we actively experience sound over the course of our lives has a profound effect on how our nervous system functions.”

Kraus, professor of communication sciences in the School of Communication and professor of neurobiology and physiology in the Weinberg College of Arts and Sciences, is co-author of “Musical experience offsets age-related delays in neural timing” published online in the journal “Neurobiology of Aging.”

“The new Northwestern data, with recent animal data from Michael Merzenich and his colleagues at University of California, San Francisco, strongly suggest that intensive training even late in life could improve speech processing in older adults and, as a result, improve their ability to communicate in complex, noisy acoustic environments,” Caspary added.

Previous studies from Kraus’ Auditory Neuroscience Laboratory suggest that musical training also offset losses in memory and difficulties hearing speech in noise — two common complaints of older adults. The lab has been extensively studying the effects of musical experience on brain plasticity across the life span in normal and clinical populations, and in educational settings.

However, Kraus warns that the current study’s findings were not pervasive and do not demonstrate that musician’s have a neural timing advantage in every neural response to sound. “Instead, this study showed that musical experience selectively affected the timing of sound elements that are important in distinguishing one consonant from another.”

The automatic neural responses to speech sounds delivered to 87 normal-hearing, native English-speaking adults were measured as they watched a captioned video. “Musician” participants began musical training before age 9 and engaged consistently in musical activities through their lives, while “non-musicians” had three years or less of musical training.