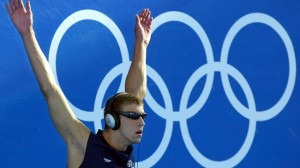 American swimmer Michael Phelps will have aggressive hip-hop music blaring through his headphones to help him win more gold medals in London.

WHEN Michael Phelps strides on to the deck at the Olympic pool in London to race for gold, one thing will be certain.

He will have headphones clamped to his head, with aggressive hip-hop pumping through his ears almost to the instant he steps on to the starting block. In Beijing, where he won a record eight gold medals, his pre-race choice was Lil’ Wayne’s I’m Me, the lyrics a perfect fit for his all-conquering performance:

Yes, I’m the best, and no I ain’t positive, I’m definite

It’s a formula that has worked for Phelps through three Olympic Games (Eminem was his artist of choice in 2004) and a record 14 gold medals, but it doesn’t just work for history’s greatest swimmer. Olympians of all types will be tapping into iPods for inspiration when the Games begin in London.

Research into the influence of music on athletic performance has shown that the right beat and lyrics not only puts an athlete into the right frame of mind to perform at their best but also improves their performance.

Sports psychologist Peter Terry, who has worked with British and Australian athletes at eight Olympic Games and will be assisting the Australian shooting team in London, is convinced that music is a powerful tool in sport.

Terry, professor of psychology at the University of Southern Queensland in Toowoomba, says there are generally four effects of music that are supported by a large body of scientific evidence.

The most obvious is “to enhance mood, to slow us down or speed us up — that’s the most reliable effect”, and the one Phelps uses so effectively.

But music also has been shown to improve endurance performance, assisting people to run 18 per cent longer, according to research by Terry and his English colleague, Costas Karageorghis of Brunel University. “The performance effects are fairly reliable in sports like running, cycling, rowing ergo tests,” Terry says.

Despite more effort, there is a perception of less exertion. “When people listen to music, they believe they are working less hard than when they don’t listen to music. It’s about 10 per cent difference in the training environment.”

But it is not just perception: research suggests music has a physical effect. “When you are doing the same amount of work while listening to music, you use 1-2 per cent less oxygen,” Terry says.

The reason for this is unknown but Terry speculates it is owing to the metronome effect of moving your body to the beat of the music.

“It may be due to the efficiency of the rhythm, that a person makes fewer micro-adjustments to their technique, or it could be a general relaxation response that enhances oxygen efficiency,” he says. “Music is most effective when matching the tempo of the music to the tempo of the activity. We call that synchronous music. If you want to run at a pace of 140 beats per minute, you choose music at that tempo. But with elite athletes they need slower music because they run at 180 beats per minute and there’s no music fast enough for that so they tend to choose 90 beats per minute and take two strides per beat.”

One of the greatest distance runners in history, Ethiopia’s Haile Gebrselassie, recognised this benefit long ago. In a famous illustration of the power of music he requested Scatman to be played on the PA system to help him break a world record in Birmingham in 1998. He explained that the song’s rhythm was “a little bit faster than the rhythm of my legs. That always motivated me.”

The International Association of Athletic Federations subsequently banned the use of music for that purpose. “They acknowledged that it worked,” Terry says.

The beat may have a physical effect, but Terry says the whole package — a song’s tempo and lyrics — has psychological effects. He experienced music’s uplifting effect as he battled to complete his first marathon. “I was almost out of my feet but in the last mile I could hear Chariots of Fire coming from the stadium and that lifted me to run the last mile,” he says.

Before competition, an athlete’s response to music is more emotional than physical. “Louder, faster music tends to raise arousal levels,” Terry says. “What you are doing is modulating your mood.”

Not all athletes are looking for Eye of the Tiger.

“You might expect a boxer to choose something aggressive but I know one heavyweight boxer who chose Japanese classical music because he was looking for the same lightness and precision in his action,” Terry says.

Sydney sailor Krystal Weir, who will compete in the Laser Radial class at the London Games, chooses her pre-competition music based on the sea conditions in front of her, selecting songs that match the tempo of the swell.

World champion snowboarder Alex “Chumpy” Pullin takes it to an even higher level, as the lead singer of a reggae-influenced band, Love Charli. Not only does he often listen to music, he is never without his guitar as he tours the world’s snowfields.

Athens Olympic gold medallist shooter Suzy Balogh says the key is “monitoring your mood and choosing something appropriate for getting you in the zone and elevating your heart rate a bit, because we need that adrenalin to shoot well”.

“We’re not like the pistol and rifle shooters,” she says.

“We’re an action sport. What we do is a bit like a tennis serve; you need that explosiveness. I use it to alter my mood to get myself in the right frame of mind for competition. If I am flat, I listen to something up-tempo, or if I’m stressed I’ll listen to something calming. It helps me find the zone.”

Evanescence provided the soundtrack for her 2004 Olympic gold medal win but more recently she has been partial to Motorhead’s Fight, Jamiroquai’s Canned Heat, Pitbull and David Guetta’s Titanium, with lyrics such as:

I’m bulletproof, nothing to lose

Fire away, fire away

Ricochet, you take your aim

Fire away, fire away

You shoot me down but I won’t fall

Balogh also has some Mozart and the Star Wars soundtrack on her iPod. “It’s not just about how I want to feel; it’s about having everything under control and getting rid of outside distractions,” she says. “I listen to about four or five tunes, about 20 minutes before I compete, because I want to put one in my head and leave it there subconsciously while I’m competing. It helps me hold my tempo through the rise and fall of each shot; it helps me modulate my breathing and my heart rate.

“I am quite a chatty person so music helps me to withdraw and get into a state of focus. Sometimes I put my headphones on so someone else doesn’t put things in my head I don’t want there.”

Terry uses certain music as a trigger for athletes to enter their competitive mindset, often subconsciously. “It’s a bit like a song that takes you back to your first love,” he says. “If a song equates to performing really well, you can condition that response to it, like Pavlov’s dog. If an athlete does their visualisation for the Olympics to a particular song, plans their mental game to that tune, you can forge a connection between that mindset and the song. Once that’s done, you only have to play that song to generate that mindset . . . When we drive to the ground I will play a particular song on the bus. Sometimes I whistle it at certain times.”

He’s had success with Whitney Houston’s One Moment in Time and he also likes Delta Goodrem’s Together We are One for teams, and to make individual athletes feel “they are not alone out there”.

The world champion Kookaburras will go to London as the gold medal favourite in men’s hockey, and defender Matt Swann says many of them use music to psych themselves before games.

“When we are in the rooms (at the hotel) we have a playlist we have created, with new music that has a good beat to get you pumped up,” he says. “Then when we get on the bus, we tend to listen to our own iPods. I have my playlist; I listen to rap, some old school stuff, a bit of house music, some David Guetta, anything that has a good beat to focus you and get you ready. You want to be in a mood where you can use your nerves to your advantage, but be calm and ready to accept anything that happens on the field.”

The Kookaburras have taken inspiration from the American HBO sports documentary series Road to the NHL Winter Classic, feeling a kinship with the frozen version of hockey. So Flo Rida’s Good Feeling, featured on the show, has also had a workout:

Got adrenaline, never giving in

Giving up’s not an option, gotta get it in

Witness I got the heart of 20 men

No fear, go to sleep in the lion’s den

That flow, that spark, that crown

You looking at the king of the jungle now

But Terry cautions that music doesn’t work for everyone: “Some people are distracted by it and don’t want that distraction.”