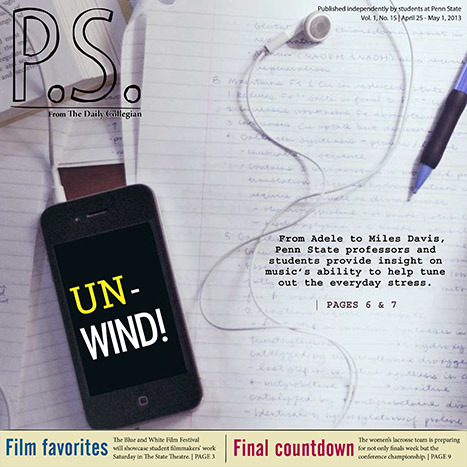 For many students, the semester can be stressful, packed with homework, exams and activities. And to escape the stress found in daily lives, some use music to deal with it.

However, it is not only students who turn to music when life gets difficult.

Stories of people who claim that music has helped them through tough times are everywhere. People connect both with lyrics they can relate to, as well as the overall feel of a song.

“Music has an extraordinary effect on most people, both emotionally and physically,” said Jennifer Partyka, an integrative arts professor at Penn State.

Partyka, who currently instructs INART 115 (American Popular Music 1850-1954), and INART 125 (A History of Punk Rock), said that she has read hundreds of papers in which students have touched on their connection with music.

She said many students have said they are influenced by lyrics that are meaningful to them. She believes that lyrics can make people feel less alone in their problems.

“That is why genres like punk and metal speak so directly to their audiences,” Partyka said. “The visceral sound of that kind of music helps a lot of people deal with harsher emotions in an acceptable way.”

In fact, Partyka said, “harsher emotions” were a catalyst for the development of the punk genre in Great Britain.

Partyka said in the early to mid 1970s, unemployment for young, working-class citizens in Britain was at 20 to 30 percent.

“Millions of young people were poor with no real prospects, and they were angry,” she said. “This is why the first British punk bands formed, and by 1976, the genre exploded.”

However, Partyka said that the genre and type of music an individual connects with is all based on personal preference.

Members of the local ska band The Wondershop Showdown spoke to the benefits of making music in addition to simply listening to it.

Pat Rice (sophomore-hotel, restaurant and institutional management), who plays trumpet for the band, said that a lot of people write music when they are going through troublesome times in their lives, so others can relate to the music.

“Sometimes people don’t even know what kind of emotions they’re feeling, so music is the only way they can relate to anything,” Feitel, Class of 2012, said.

Many Penn State students have favorite artists or albums that helped them get through the semester.

Aurelia Confer said Adele is her fallback if she’s in a bad mood.

“Her music resonates with a lot of people,” Confer (sophomore-division of undergraduate studies) said. “It makes you feel like you’re not the only person in the world who’s hurting.”

Jordan DeAcosta, Class of 2011, reflected on the music that helped him escape from the stresses of college.

For him, Miles Davis’ album “Kind of Blue” let him de-stress after work.

“It kind of takes you away from it all,” DeAcosta said.

“It’s an escape from everything that’s so busy and complicated. It has a way of simplifying things.”