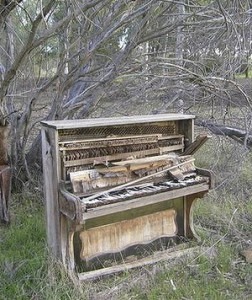 A PIANO sat at the centre of things in our family. It still does. Any excuse for a gathering set the piano singing. Birthdays, anniversaries, Christmas, Easter, picnic races, a sheep or cattle sale, a wake …

Our grandfather played almost anything with great elegance, from the classics to music hall, cousins stepped up with boogie-woogie and rock’n’roll and we’d wait for an uncle to drop his left shoulder at the keyboard, a certain sign he was in the mood for Hank Williams.

Our mother was given to Schubert and Brahms and accompanied our father with his fine tenor and his love of arias; an aunt possessed a soprano that could make the night roll away.

And as the hours went by in the old family homestead, everyone reached back and the songs of Ireland floated across dark Australian paddocks, as if Donegal and Galway hadn’t been left behind generations before. On those nights, the Mountains of Mourne swept down to the sea a very long way from County Down, and there was still the ache of diaspora to it.

Music diverts, inspires and heals. It lends context and variation to the colour of life.

My brother could twist the delicate Moonlight Sonata into a long free-form jazz improvisation, Beethoven still somehow contained within it, setting a trance upon us.

When a motorcycle crash took him, hardly more than a boy, the clan gathered for the mourning and sought solace in the piano in the knowledge that here, at least, the magic that was his would never quite fade away.

A singularly musically gifted cousin has rescued the old piano from our grandparents’ home and built a stone shrine around it. It is still perfectly in tune, vibrating with memories.

My daughters, who play guitar, remain entranced when my mother, in her 90s now, finds herself regularly moved to sit before her piano and lose herself in music.

The piano – upright, baby grand or grand – seems a peculiar instrument in these restless times. So bulky, so immoveable, so permanent in an era when our lives have become utterly mobile and our pleasures airily transportable. Why, you can stick your entire musical collection in your pocket and plug into it with a set of earphones wherever and whenever you wish.

An old piano is an anchor. Perhaps that physical quality constitutes much of its enduring allure. Hold on, it says, you mustn’t discard the past so easily – slow down, sit awhile, let it sing old tunes to you.

Even when a piano dies, its frame cracked, leaving it beyond the skill of a tuner, there are those who can’t bear to consign it to the breaking yard. In the West Australian wheat belt, a farming couple has granted asylum to exhausted pianos.

Jason Cotter, a writer from the Mornington Peninsula, recently penned an essay about the sanctuary for ruined pianos established by Kim Hack and Penny Mossop on their Wambyn Olive Farm, not far from the village of York, east of Perth. More than 20 old instruments sit scattered around the paddocks, beneath trees, by windmills, home to bush rats and possums and termites, the wind caressing their strings. Visitors from around the world come to pay tribute. Cotter wrote that he found ”less of a funeral and more of a life well-lived”.

Perhaps, though I remain unconvinced. It sounds like a graveyard for lost good times.

A piano, indeed, is nothing without the music, its reason for existence.

And you don’t have to find your music in a piano. It is, in the end, nothing more than an instrument – albeit an instrument of genius – from which the enchantment of music can be conjured.

When the federal Treasurer, Wayne Swan, set out to invest his recent John Button lecture with an exposition of his long love affair with the music of Bruce Springsteen, he undoubtedly knew he was setting himself up for mockery. A lot of us who write about politics weighed in, and I wrote a sketch that began ”What did Bruce Springsteen ever do to deserve this?”

Swan is likely to have welcomed even the lampoonery on the basis that in a political cycle like this, any publicity is good publicity. People were talking about him, and they were discussing something other than taxes and the like, even if they felt his joining of a New Jersey rock poet’s songs about US working class aspirations with the Australian experience was a trifle clunky.

On reflection, Swan did himself a favour, undeserving of derision.

He exposed himself as a man with a passion for music who wrote his speeches to the rhythm of it, whatever you might make of his particular choice.

He released a video that captured him sitting at home, a form of bliss cloaking him as he listened to his daughter singing and his son playing guitar. There was a fetching innocence to it, even if much of the rest of the video was self-conscious political fluffery.

His willingness to embrace music as an inspiration made him more than a politician. Who can be altogether unkind to anyone who is moved by song?

His diverting address reminded us that we could do with less drone and more melody in our public discourse; more cadence and less discord; more swing and less tumult.

As the Federal Parliament reconvenes after the winter recess and we prepare for the assault of a year-long election campaign, we could do with a metaphorical piano in the centre of things; a pianoforte, to give it the full loveliness of its original name.