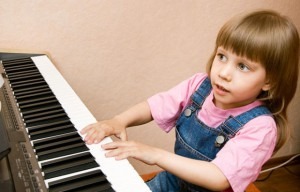 Children from poor neighborhoods in Los Angeles who took regular music lessons for two years were able to distinguish similar speech sounds faster than their peers.

There is much evidence that poverty, and the chronic stress it creates, hinders the development of young brains. However, new research finds one important aspect of neural functioning is gradually strengthened when underprivileged children engage in a challenging but fun activity: Music lessons.

A newly published study of six- to nine-year-olds living in gang-infested areas of Los Angeles finds those who spent two years participating in a free music-instruction program processed the sound of certain syllables more rapidly than their peers with less musical training.

“This research demonstrates that community music programs can literally remodel children’s brains in a way that improves sound processing, which could lead to better learning and language skills,” reports lead author Nina Kraus of Northwestern University. Her study is published in the Journal of Neuroscience.

Kraus and her colleagues followed 44 children for three years. All were students in the Los Angeles public schools; all lived in designated gang-reduction zones.

At the beginning of the first year, 18 students enrolled in the music-training program conducted by the Harmony Project. After six months or so of introductory musicianship classes (one-hour sessions twice weekly in which they learned fundamental skills), they moved on to group instrumental instruction.

Another 26 students had these lessons deferred for one year, starting their instruction at the beginning of year two.

At the end of each school year, all participants took part in neurophysiological testing, in which researchers determined how quickly their brains processed the distinction between the sounds “ba” and “ga.”

“Children with two years of training showed a marked improvement in the neural differentiation of the syllables,” Kraus and her colleagues report. “Across both groups, more music training was associated with larger enhancements in neural function.”

“This suggests that music training transferred to non-music listening settings to influence automatic auditory processing,” they add. “These improvements were in processes that are important for everyday communication.”

“Previous investigations have revealed that, as groups, children who are better readers, and children who hear better in noise, show stronger neural distinctions of these same syllables. These findings therefore provide support for the efficacy of community and co-curricular music program to engender improvements in nervous system function.”

Importantly, the researchers found this particular benefit of music education doesn’t kick in until after two full years of training. A few lessons won’t do it.

The good news, however, is that you don’t have to enjoy the privileges of wealth, or even middle-class status, for music training to make a difference.