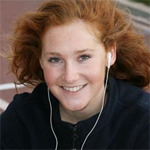 LISTENING to music can greatly boost a person’s ability to exercise – so much that Olympians and joggers can actually go faster, higher and stronger with the right tune.

The effect on their body is so profound there is a measurable difference in their oxygen requirements. “We are not sure quite what the mechanism is, but one possibility is that the music has a relaxation response that increases blood flow,” Professor Terry said.

“Once your body gets in tune with it, music can regulate the efficiency of your physiological system.

“It is to do with the effect you are after – to go farther, faster or to just have a more pleasurable experience.

“The key is the tempo of the music matches precisely either the stride rate, or the rate at which you are exercising.”

Professor Terry told the International Congress of Applied Psychology conference in Melbourne that many elite athletes incorporated music into their training, with psychologists matching music to the activity to boost their performance by altering tempo and lyrics.

Professor Terry said there was an art to matching music, such as using Red Hot Chilli Peppers to prepare rowers and Japanese classical music to train boxers.

During a University of Southern Queensland study, Professor Terry found elite triathletes running on a treadmill could extend themselves for 18 per cent longer if they listened to music in tempo with their stride.

But he said choosing music with inspiring lyrics could also work despite its tempo, particularly for pre-match warm-ups which are important to set an appropriate tone and not necessarily increasing adrenalin or excitement.

There are websites that can match stride patterns and exercises with specific music.

MUSIC TO GET YOU MOVING
Jessica Rothwell’s favourite songs to train to:
No Cars Go – Arcade Fire
I See You Baby – Groove Armada
You’ve Got The Love – Florence And The Machine
Heads Will Roll – Yeah Yeah Yeah’s
Celestica – Crystal Castles

– Match the music to your activity and the psychological effect you want to experience, (e.g. loud, fast, rhythmical, bass-driven music is great for psyching yourself up before interval training).

– Consider the intensity of the activity – you will need faster music if you are running at a faster pace.

– Consider music that creates motivating images in your mind. It may be used to associate with popular culture such as the film Rocky or to personal memories.

– Match the tempo of the music to your expected heart rate during your training session.

– Choose music that contains positive affirmations of running such as “keep on running” or “work your body”. Positive statements such as “moving on up” or “I believe” can also have a motivating effect.