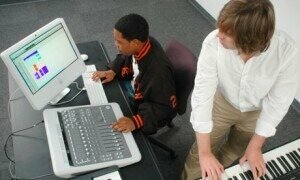 With unique skills and a broad range of graduate jobs on offer, music students have better prospects than people imagine

If you study medicine at university, chances are you’ll become a doctor. For music students, it’s less obvious what job you’ll end up with… but it could be really fulfilling. The perception that options are narrow and jobs are few for music graduates needs to change.

It’s wrongly assumed that when it comes to jobs, music students are confined to their field of study. In reality, music graduates go on to do a wide range of jobs in a variety of different industries.

Alumni surveys from the University of Nottingham show that music graduates are employed across a varied range of fields. As you might expect, a large proportion (50%) work in the creative industry, but the roles performed by graduates vary greatly.

Music grads work in publishing, editing, media production, broadcasting, and marketing. A number work with professional ensembles, but not all are performing as musicians – many work in management roles.

Less anticipated but no less common is the employment of music graduates in finance and banking, legal and consultancy.

Dr Robert Adlington, an associate professor of music at the University of Nottingham, credits these successful and varied outcomes to the highly desirable skills developed by music students during their studies.

In 2011, the Confederate of British Industry outlined the seven skills that define employability: self-management, team work, business and customer awareness, problem solving, communication, numeracy, and IT skills. Adlington says that music students develop all seven of these. By this measure, music graduates are among the most employable of all.

While some of these skills are acquired students of all subject – for example, team work, good communication, self-management – Adlington points out that music students have an edge. The experience of organising, hosting, and performing in events that are open to the public provides them with skills beyond those on other degree programmes. Few degrees require knowledge of customer awareness, or interaction with the public, for example.

James Lister studied music at the University of Nottingham but is now an associate with legal firm Charles Russell. His degree “taught a whole load of things you can’t find elsewhere”, such as public speaking and self-expression. He says that these skills, in addition to the “highly analytical aspects of a music degree”, which enable graduates to read, digest and form an opinion on a huge amount of information, greatly aided his transition into law.

The employability of music graduates appears to be in for a further boost. In addition to covering the traditional elements of a music degree (composition, performance, theory, history and so on), new modules that are focused specifically on employability are set to be introduced.

“Students don’t want to leave their future to chance anymore,” says Adlington, adding that employability is “part of our core model”.

Jordan O’Shea, who graduated from SAE with a first in audio production, says the institute fast-tracked his career, allowing him to go it alone. He says:
“Without SAE, I wouldn’t have been able to record my own album. It allows you to go from being a bedroom producer to being a contender.” He adds: “Of course, there’s no guarantee you’ll be the next guy producing Adele.”

Students are taught not to depend on having access to a studio, or support or funding from a record label. Since leaving SAE, O’Shea has set up a self-built studio. From it, he co-founded Bear on a Bicycle, an award-winning Oxford-based music and art collective that cracked the city’s scene in under a year.

The collective’s success is a reflection of how changes in the music industry allow artists to produce and publicise themselves. The internet means artists can publish, distribute, and promote their own work. These methods are nothing new, but if combined with professional knowledge and experience, it can be a winning, name-making recipe.