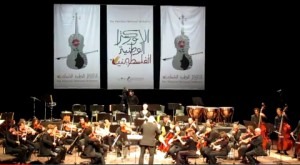 Ramallah, West Bank — Monday night I attended a piano concert in Ramallah given by the internationally acclaimed Palestinian pianist Saleem Abboud Ashkar who was born in Nazareth and now lives in Berlin. Despite the hardship of the Israeli occupation, a vital classical music revival has emerged in the West Bank in the last few years.

I grew up in a house in Ramallah where we often listened to Western classical music, which my father loved. But all of it was recorded. There were very few live performances here in those days.

Arab Jaffa, where my father lived before the nakba, was a vibrant cultural center where the best musicians from the Arab world performed. Nearby Tel Aviv was the home of the Palestine Symphony Orchestra whose first conductor was Arturo Toscanini. It included Arab and Jewish musicians and my father attended many of the concerts they gave throughout Palestine.

With the loss of Palestine after the formation of Israel in 1948 there was no revival in the West Bank of the cultural scene that had been so vibrant in cities like Jaffa, Jerusalem and Haifa. After the Israeli occupation in 1967, my father would take me to West Jerusalem and Tel Aviv to hear live classical music. With few exceptions there were still no performances on the Palestinian side.

All this has changed. In 1993 the Edward Said National Conservatory of Music was established and began teaching a new generation of Palestinians serious Arabic and Western classical music. By 2010 there was enough of a pool of professional Palestinian musicians in the occupied Palestinian Territories and outside that it was possible to establish the Palestine National Orchestra, which had its debut concert in December 2010 and has since performed in concert halls and opera houses around the world.

Classical music in Palestinian society is no longer the reserve of the privileged classes. The Al Kamandjati Association, established in 2002, aims to support the education of Palestinian children, especially those living in refugee camps and villages throughout Palestine and Lebanon.

And in 2004 the Barenboim-Said Foundation opened a music kindergarten in Ramallah emphasizing the importance of music in the early education process and the development of children. It became a model that has been copied in other parts of the world.

The concert Monday night was free. It was performed at the Palestinian Medical Relief Society’s concert hall — which has superb acoustics. The hall was inaugurated a year ago with a performance by the Youth Orchestra of the Barenboim-Said Foundation, conducted by Maestro Daniel Barenboim, who promised to encourage world class performers to come and perform there because, as he said, a good musical education must include the opportunity to listen to good musical performances.

Last December the pianist Andras Schiff gave a riveting performance of Bach’s Goldberg Variations. When the concert ended, he stood up, and in his quiet manner and soft voice, he told the audience (I’m paraphrasing): I have chosen to play this piece because I think it is one of the most beautiful pieces of music that has ever been written. To me, it is like a journey that goes through many difficulties but ends in hope.

He wished us the same in our journey in Palestine.

The late Edward Said, who inspired much of the musical development that has taken place here in the last few years, wrote about the important role music can play in molding personality and bringing people together. He understood that in music there is a clear distinction between power and force. The lower the volume in the music, the greater is the need for intensity.

In the Middle East we don’t need empty loud voices calling for peace — as many Israeli leaders specialize in doing. Lower voices that mean what they say are sure to be more effective. Perhaps music can help in making more people understand this important distinction.