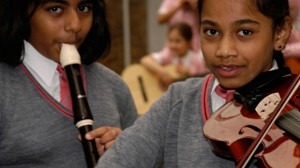 Children from richer homes are also more likely to have had music lessons.
Photograph: John Powell/Alamy

The proportion of children in the UK who know how to play a musical instrument has almost doubled in the past 15 years, but poorer youngsters are more likely to miss out, according to a report.

The study, by ABRSM, the exam board of the Royal Schools of Music, also found that the piano, recorder and classical guitar were the most commonly played instruments by children and young people, but adds that the drum kit, electric and bass guitar have become increasingly popular. The electric guitar has overtaken the violin in popularity.

Long-term music education is often still the preserve of the rich, the study says, with the cost of learning to play and taking lessons a “major barrier”.

The study compares its results with previous research conducted by the organisation. It reveals that, overall, about 5.5 million five- to 14-year-olds (76%) say they know how to play an instrument, up from 3.2 million (41%) in 1999. This is a cause for celebration, the exam board says, especially in England where government initiatives have had a positive impact on music education.

But the study also suggests there are significant gaps between the proportions of rich and poorer youngsters who play an instrument. An estimated 90% of those from the wealthiest backgrounds will have played an instrument, according to the survey, compared with 80% of those from other social backgrounds. Those from richer homes are also more likely to have had music lessons, it adds.

“Children from lower socioeconomic groups continue to be significantly disadvantaged compared with their peers from more affluent backgrounds,” the study says. “Sustained, progressive music education tends to be the preserve of children born to wealthier parents. This report shows that adults who had private lessons as children and sat a music exam were much more likely to still play an instrument – and the higher the grade achieved, the more likely they were to continue learning.

“The cost of learning to play and of taking lessons is a major barrier, and children without access to tuition are significantly less likely to carry on playing.”

Lincoln Abbotts, director of strategic development at ABRSM, said: “It is hoped the report will be used to influence, change and further improve the circumstances in which children and adults engage with music. The political environment has shifted considerably in recent times with significant government investment, sector lead initiatives and increased enthusiasm among our young people for all the extraordinary joys and benefits of making music.”