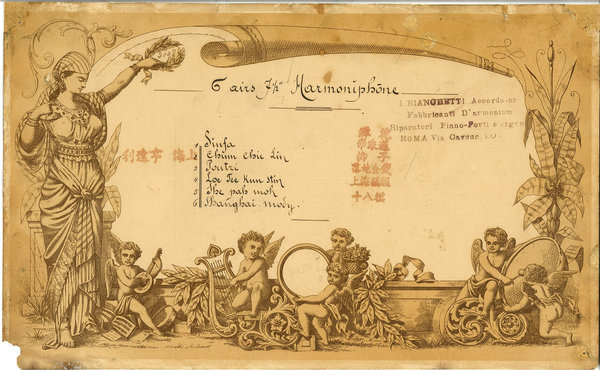 THE Murtogh D. Guinness Collection of mechanical musical instruments and automata at the Morris Museum here received national attention after Martin Scorsese’s film “Hugo,” which appeared last November. The museum’s Clown Illusionist, with a disappearing and reappearing head accompanied by a cheery tune, was featured on “CBS Sunday Morning.”

Even now few visitors spend much time in the room where the Swiss music boxes are displayed. Yet, being a musicologist, I lingered there alone last January as my children ran ahead. I kept listening to one box in particular, a harmoniphone from around 1877, equipped with a reed organ and able to play six Chinese tunes from a cylinder.

Confused at first, I suddenly realized that I had stumbled on the key to a musicological mystery many decades old. Scholars have long known that Puccini used Chinese tunes in his opera “Turandot” (set in China and left incomplete on Puccini’s death in 1924). But they have been puzzled by the origins of two “Japanese” tunes in his “Madama Butterfly” (set in Japan and first performed in 1904). What I had found were Chinese sources for two major themes in “Butterfly” and a surprising connection between that opera and “Turandot.”

Was it possible that Puccini had heard this very box in Italy and that it provided crucial inspiration for “Madama Butterfly”?

We know that he heard a “Chinese” music box in 1920 at the Bagni di Lucca home of Baron Edoardo Fassini-Camossi, a veteran of the 1900 Boxer Rebellion in China and of a military operation there at the end of World War I, and an amateur composer with published pieces to his credit. The baron probably acquired this box and other souvenirs in China at the notorious “loot auctions” that followed the suppression of the Boxers.

Puccini’s visit was leaked to the press and later reported in the librettist Giuseppe Adami’s books on the composer, so opera lovers have long known that three tunes from the Fassini music box, now in the private collection of Lionello Ghiotti in Italy, were prominently featured in “Turandot.” The most famous Chinese song, commonly called “Mo Li Hua” (“Jasmine Flower”), signals the seductive and glorious aspects of the fairy-tale Chinese princess Turandot; another tune accompanies the entrance of the three ministers; a third serves as an imperial hymn.

Thanks to a tip from a gas station attendant, this music box was rediscovered in Rome on Feb. 5, 1965, by the musicologists Michael Rose and Hans Hammelmann just in time for a BBC radio broadcast about the opera. This box was also featured on Italian television in the 1970s and ’80s and by William Weaver in a 1974 Metropolitan Opera intermission broadcast.

The Guinness box at the Morris Museum includes two of the “Turandot” melodies but also includes a principal theme from “Madama Butterfly,” a melody that the British scholar Julian Budden referred to as “almost the mirror of the soul of Butterfly.” Puccini used several popular Japanese tunes in “Butterfly,” including “Sakura, Sakura” and “Miya Sama,” but the Guinness box reveals that around 1901 he was apparently willing to use Chinese music as well in his representations of what he termed the “yellow race.”

For decades, in an effort to reconstruct Puccini’s models, scholars have been stitching together fragments of published Japanese songs that he might have seen. Fortunately the Guinness box includes its original tune sheet, listing the folk-song titles in Chinese and in transliteration, which turns this music box into a Rosetta stone. The main theme for Butterfly, a geisha, is labeled “She Pah Moh” on the tune sheet. Some musicological detective work, with help from the Chinese language scholars Cornelius C. Kubler and Ping Wang, identified the tune as “Shiba Mo,” or “The 18 Touches,” an erotic song often banned in China. This folk song, which also turns up in Chinese operas, is delivered in the voice of a male lover celebrating 18 parts of a woman’s body in explicit detail, moving caress by caress from head to toe.

The specific moments when “Shiba Mo” appears in “Madama Butterfly” and Puccini’s sense of humor, said to have been rakish, suggest that he knew what the song was about. The melody appears prominently at the climax to Butterfly’s entrance, as she presents herself to her lustful American bridegroom, Lieutenant Pinkerton. Butterfly sings the whole melody, in the same key as on the Guinness music box, as she explains to Pinkerton that she has severed all ties to her Japanese past and will devote herself entirely to him. The tune also appears at the climax of the Act I love duet, as Pinkerton eagerly leads Butterfly into the house to consummate their marriage.

Scholars have praised Puccini’s “Japanese orchestrations,” but his setting of “Shiba Mo” can best be described as sounding like a music box. This is especially true when the tune is heard at a fast music-box clip, complete with imitation birdcalls, as dawn breaks in Act II after Butterfly’s long night anticipating Pinkerton’s return. Knowing the pornographic and mechanical sources for this melody will certainly color our emotional response to this archetypal, cross-cultural tragedy.

The second musical motif closely associated with Butterfly — heard most prominently when reference is made to her father’s death — has also inspired an extended hunt for its Japanese source. This motif appears in two of the Chinese melodies on the Guinness box. It seems to have gone unnoticed that this second mystery motif in “Madama Butterfly” appears in slightly different form in “Turandot” as part of the Emperor’s hymn. So the same motif represents an exotic father in each opera.

Long-held assumptions concerning Puccini’s devotion to exotic authenticity have obscured this and other connections between his two Orientalist operas. On closer inspection the opening measures of “Turandot” seem to pick up exactly where the final measures of “Madama Butterfly” left off. Indulging in some interpretive fantasy play, we might even ask whether Turandot in 1924 has the 1904 Butterfly in mind when Turandot justifies her ruthless riddles and decapitations of suitors by telling of a long-lost female relative who had been ruined by a foreign male.

How likely is it that Puccini heard the box now on display at the Morris Museum? Unpublished letters made available to me by a descendant of the Fassinis indicate that Puccini had known the family long before his 1920 visit and that he was a friend of Baron Alberto Fassini-Camossi, Edoardo’s brother. Mounting evidence indicates that the Guinness box may also have been owned by the Fassinis and heard by Puccini in time to be of use as he drafted Act I of “Madama Butterfly.”

The tune sheet on the Guinness box bears the name of a Shanghai department store that carried Swiss watches and music boxes in the late 19th century. The title list in Chinese corrects the transliterated order of the last two tunes to match how they actually appear on the cylinder, with “Shiba Mo” as the last melody, indicating that someone in China inspected this box. Finally, the name and address of a repair shop in Rome on the tune sheet reveal that unlike most other Swiss-made music boxes exported to China, this one returned to Europe and was even owned in Italy. Mr. Guinness acquired the box by the early 1960s. Arthur Cunliffe, the president and registrar of the Musical Box Society of Great Britain, reports that in the registry of more than 10,000 music boxes compiled over the past 30 years, only 13 are listed as playing Chinese melodies. This indicates that few boxes returned to the West from China. Of those that did return to Europe, few had the combination of melodies that appeared in Puccini’s operas, and fewer still would have passed through Italy. So far only the Guinness box presents all the right clues suggesting an encounter with Puccini.

The origin of Chinese music boxes like the one in the Guinness collection is as fascinating as their role in Puccini’s operas. Up to the mid-19th century the primary sources of knowledge and transcriptions of Chinese music in Europe were the writings of French Jesuit missionaries. But no French Jesuit would touch “The 18 Touches.” That racy tune, one in a set of 10, was taken to Europe in 1845 by Frederic Bovet, a violinist, composer of a published string quartet, vice consul for France during the Second Opium War and member of the successful Bovet Swiss watchmaking family.

Seeking to expand their export business to include mechanical music, the Bovets decided to market music boxes featuring Chinese songs. Selections from Bovet’s modest collection of Chinese melodies were soon pinned onto numerous cylinder music boxes for export to China. Leading a multinational company based in London, with offices in Canton and Macao and production in its hereditary home in the Jura valley of Switzerland, the so-called Bovets of China were clearly captains of globalization. But the global impact of Bovet’s Chinese song collection was not previously realized.

The highest-profile tune in Bovet’s collection had already been known in Europe as “Mo Li Hua” (“Jasmine Flower”). But the title given for this melody on the music-box tune sheets is always “Sinfa” (“Fresh Flowers”), and this is the title that Puccini would have seen as he listened to one or more of these boxes. This melody first appears in “Turandot” sung by a boys’ choir accompanied by offstage saxophones. The sound of the saxophones playing this Chinese tune closely resembles the sound of the reed organ appearing on the Guinness and other musical boxes that include “Sinfa.” This is but one of several clues indicating that a music box was Puccini’s source for this melody.

By featuring “Mo Li Hua”/“Sinfa” in his final opera, Puccini ensured that it would continue to represent China for the next century. The Chinese composer Tan Dun used this melody, in a setting inspired by Puccini’s, in his “Symphony 1997,” commemorating the transfer of sovereignty over Hong Kong from Britain to China, and in music for the Beijing 2008 Summer Olympics medal ceremonies.

Previously, “Mo Li Hua” was used in World War II Hollywood films to represent the Chinese, and the Chinese motif symbolizing Butterfly’s grim Japanese heritage (the one that turns up in “Turandot”) shaped musical stereotypes signaling the Japanese enemy. The cycles of influence and representation set in motion by these music boxes continue in the 21st century.

Some mysteries inspired by the well-traveled Guinness box remain unsolved. A recent exploration inside this box revealed fake Chinese writing beneath a caricature of a woman with European facial features. So far this boxed Mona Lisa has refused to give up her secrets.

My own discovery of this tale was serendipitous. The Guinness automata drew my family to the Morris Museum, but by the time we left I was embarked on an entirely unforeseen research project. Perhaps another mechanical musical treasure at the Morris holds secrets awaiting the chance encounter of another unsuspecting musicologist.