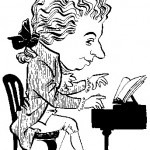 Classical music as a tool for punishing youth ignites debate in U.K.
News that a school in Derby, Britain, was piping classical music into a special detention area set up to punish troublesome students has ignited a debate about the use of the pieces.


The idea of using Mozart and Ravel as deterrent for the badly behaved has roused the ire of both music lovers and critics of the public education systems.

Brendan O’Neill, editor of spiked-online.com, and the author of a recent essay titled “Weaponizing Mozart” for Reason Magazine said the school is “using great achievement to whack people across the head.”

The headmaster of the school where children are forced to listen to classical music as a punishment for bad behaviour said infractions of school rules have dropped by about 60 per cent since he began the special detentions.

“What he’s saying in effect is children don’t like classical music and we will exploit this fact by using it as a punishment against them,” O’Neill said in an interview Wednesday with CBC’s Q cultural affairs show.

The state school system seems to have abandoned the idea of educating children about great culture, he added.

“As a result children are fairly alienated from classical music. They are not taught to appreciate it; they are not exposed to it in school — they probably think of it as posh music for posh people.”

He’s also heard of town councils in Britain, Wales and Northern Ireland that use classical music to keep youth away from public areas. Blasting classical music from speakers in the park or square seems to keep the kids away.

“It’s not only authoritarianism, it’s backward. It’s contributing to alienation. All these kids are being hurried away from public areas and told that they are not part of society,” O’Neill said.

He compared the technique to Anthony Burgess’s A Clockwork Orange, in which the miscreant Alex is given a therapy that makes him hate Beethoven.

But councils that use the music to deter criminal behaviour such as vandalism say it works. Psychologists also have said music can calm anti-social children.

The headmaster of the Derby school at the centre of the debate said it certainly seems to relax them.

“I am sure that, with some of them, sitting in silence listening to the music lets them reflect more about the reasons why they are in detention,” Brian Walker told the Daily Mail.