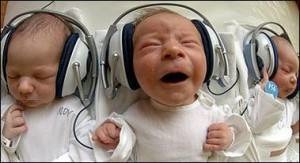 New study finds Mozart’s music has a positive effect on the development of premature newborns.

Latest research from the Ichilov Hospital in Israel has revealed listening to Mozart’s music can significantly aid in the faster development of premature newborn babies. The study, conducted by Professor Dror Mandel, took 12 babies of a similar size born in the 30th week of pregnancy – 6 weeks earlier than expected – and exposed them to a variety of Mozart’s and Bach’s music via headphones placed inside their incubators.

Results of the study found that when listening to Mozart, the babies’ metabolic rate fell on average 9.7% in half an hour. Listening to Bach did not return as significant results, with only a 4.5% drop in metabolic rate. Babies monitored without any music playing experienced no change to their metabolic rate.

Mandel concluded in an interview with Israeli newspaper Haaret that “the significant drop in metabolic rate caused by listening to Mozart’s music means premature newborns are able to increase their weight faster, which is a positive outcome.”

The benefits of Mozart’s music are not only applicable to newborns. Another study from Harvard University has recently revealed that listening to Mozart can have a positive effect on peoples’ reaction times, regardless of age. The study found that having Mozart quietly playing in the background significantly sped up test participants’ deduction skills and lowered their rate of error when undertaking a logic-based ‘Stroop’ task, compared to participants undertaking the same task without music playing.