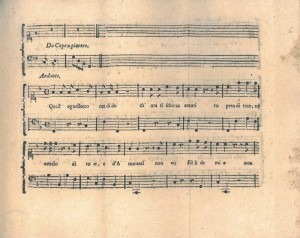 The recently discovered score, thought to be the work of Mozart and Salieri.

The score of a cantata believed to be a collaboration between the alleged rivals has been rediscovered.

The rivalry between Wolfgang Amadeus Mozart and Antonio Salieri appears to be well documented and, of course, any fans of the film Amadeus will have fond memories of the (admittedly ficticious) battle of wills and wits between the two famous 18th-century composers. Many scholars however argue that the two composers were not bitter enemies and, in fact, appreciated each other, (though there’s been little hard evidence to substantiate this). Now, German composer Tim Jouko Hermann’s recent discovery of a long-lost solo cantata score in the Czech National Library might be just the evidence that’s been missing. As with any new discovery, the work is of great interest – but this one particularly so, not only because the score has not been seen since its rumoured premiere in 1785, but also because it is believed to have been composed jointly by the two alleged arch rivals, Mozart and Salieri. Full story.