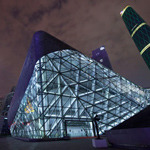 The world’s most spectacular opera house has just opened in China – but it could have been built in Cardiff. Jonathan Glancey reports on Zaha Hadid’s stunning new project.


I walk up the ramp of the new Guangzhou Opera House, and suddenly it seems like Chinese New Year. The brand new skyscrapers that surround it, each named after some global finance corporation, burst into neon life, flickering and flashing in a way that makes Las Vegas seem like a mere twinkle. By contrast, the opera house seems almost serene – remarkable given that it’s the latest design by Zaha Hadid, an architect celebrated for buildings that shoot across the urban landscape like bolts of lightning. Yet, while the pulsating lights disguise what are regular office towers, once inside, Hadid’s opera house reveals itself in all its complexity, at once highly theatrical and insistently subtle.

Set in Haixinsha Square, a brand new stretch of south China’s ever-expanding trading city, the opera house takes the form of what appear to be two enormous pebbles that might have been washed up on the shores of the Pearl river, on which Guangzhou stands. Rough-shaped things sheathed in triangles of granite and glass protrusions, one houses the main auditorium while the smaller encloses a multipurpose performance space. There’s no question, though, that the opera house is best experienced at night. As darkness falls and the foyers fill up with people, the building magically comes to life.

The opening-night audience has come to experience Akram Khan’s cacophonous dance piece, Vertical Road. Yet all eyes are trained on the doors as the architect makes her entrance. Tonight, Hadid is architecture’s Queen of the Night, making stately progress through a phalanx of photographers. For the British contingent in the wave-like foyer, there is something special in seeing Hadid inside the building she should have built in Britain years ago.

Ah, yes, the Cardiff Bay Opera House. In 1994, Hadid had designed a magical theatre for the Welsh coast. It would have become the most radical and compelling building in Britain, but an alliance of narrow-minded politicians, peevish commentators and assorted dullards holding the Lottery purse strings ensured it was never built. More than a decade on, Hadid has built her opera house. Of course, it’s not the same design, yet the building embodies the spirit as well as something of the presence of the great theatre we could have had in Britain rather than here, 6,000 miles away.

The Chinese had been thinking of an opera house in Guangzhou as early as 1993, when mayor Lin Shusen championed the new commercial and cultural quarter by the river. “It was incredible,” says Hadid. “When I first came to Guangzhou in 1981, it seemed such a hard and dour place with everyone in Chairman Mao uniforms. By the late 90s it had begun to grow very fast indeed, but where we’re standing now [in the foyer of the opera house], there was nothing whatsoever.”

Even in a city famous for building at breakneck speed, the opera house has taken more than five years to complete. But then, this was never going to be an ordinary commission. The main building comprises a freestanding concrete auditorium set within an audacious granite and glass-clad steel frame. The exposed frame is a stunning thing, a kind of giant spider’s web protruding in several unlikely directions. It seems to challenge the laws not just of conventional geometry, but of gravity itself.

The Chinese state engineers charged with the project were pushed to new limits. “The magic, though,” says Simon Yu, the Scottish-born project architect, “is in the joints that hold the structure in place.” We look up at them. Here are star-like, cast steel junction boxes that keep the adventurous structure in tension. They look spectacular. “We made them the same way they made great medieval bells. They were sandcast in an old fashioned foundry in Shanghai where the sparks flew like . . . fireworks.”

Between this exposed steel skeleton and the auditorium lie the foyers. Here, you are hard pressed to find a straight line. They waltz around the auditorium, twisting, turning, ducking and weaving. Grand stairs slope and twist majestically from the black granite floors of the foyer up to the balconies and upper tiers of the auditorium. Audience members will find it hard to break away from these spectacular vistas and take their seats.

The auditorium proves to be a further wonder, a great grotto like a shark’s mouth set under a constellation of fairylights. The space is asymmetric, but despite its unusual shape, the acoustics are perfect; the work of Harold Marshall, the veteran New Zealand acoustician. Intriguingly, he says that the strange angles of Hadid’s auditorium work to produce an acoustic perfectly suited to both western and traditional Chinese opera. “There are very, very few asymmetrical auditoriums,” says Marshall. “But asymmetry can be used to play with sound in very satisfying ways; it’s more of a challenge tuning it, but the possibilities are greater, and this one has a beautifully balanced sound.” Could it have been done in Cardiff Bay? “Of course it could.”

“Next year,” says Yu Zhang, the president of the opera house, “we will be putting on Chinese versions of Cats and Mamma Mia.” No one can accuse the Guangzhou Opera House of elitism. In fact, the aim has been to shape a building, and an institution, open to all talents. In the backstage areas, lucky schoolchildren as well as professional musicians and dance companies will rehearse in stunning mirrored rooms set under rippling ceilings, calling to mind underwater caverns and grottoes.

Outside, the experience of strolling between and around the two “pebbles” is an extension of this architectural performance. The narrow crevice between the two structures reminds me a little of the enchanting entrance to Petra in Jordan through high walls of narrowing rocks. Local people clearly enjoy it. One boy runs up a sloping wall and tries to perform a somersault. Another seems to wonder whether he might race his bike up the opposite slope; but, with so many unsmiling security guards about, he decides, wisely, to pedal on.

An even greater performance lies above. Here, by night, the surrounding towers appear to grow out of the tops of Zaha’s “pebbles”, creating ever more surreal skyscapes at each turn of the head. These views can be experienced from inside the lobbies, too, lit from end to end by windows cut into the roofs and ceilings. Through these, you can see the drama of the city even while strolling through the depths of the opera house. “The idea,” says Hadid, “is that the building is really a part of the city and you’re aware of the city even when inside. It doesn’t just go away.”

Hadid has long talked about the idea of buildings as landscapes, of shaping structures and spaces within them as if they might meander like a river. This is a beautiful idea very nearly realised in Guangzhou. If I have a criticism it is this: instead of dropping down to meet the Pearl River, the landscape of the opera house ends abruptly with further developments, including a viewing stand built for the 2010 Asian Games, and a concatenation of lumpen apartment blocks. It would have been so very special to have stepped out of a performance of Billy Budd or The Flying Dutchman and to have walked down to the river without having to think about which way to turn.

Even then, Guangzhou has to be applauded for giving Hadid and her team such a free hand with the design, when such a building has yet to make its debut in Britain. Despite building on a grand scale around the world, in the UK Hadid has just a school in Brixton, Maggie’s Centre in Kirkcaldy and the Aquatics Centre for the 2012 Olympics to her credit. For, here is an architect clearly in love with the arts, and who is an artist herself. A performing one, too, as she receives the adulation of Guangzhou walking slowly and yet so proudly through a building that she had been thinking about for almost 20 years.