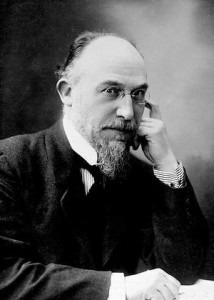 Ahead of his time ... Erik Satie's work influenced styles including ambient music
and trip-hop.

A century-old composition that requires a performer to fast before playing still captivates.


Sometimes the smallest things have the biggest impact. The aptly named Vexations is a single sheet of music by French composer Erik Satie, notated with directions that it be played 840 times in a row, very slowly. One of a number of compositions discovered after Satie’s death, it continues to fascinate performers more than a century after it was written.

In December, French pianist Nicolas Horvath completed his eighth solo performance of it at the Palais de Tokyo in Paris – it took him more than 35 hours without a break.

This month, Belgian pianists Guy Vandromme and Alain Franco will play 84 repetitions on two grand pianos as part of the Sydney Festival. The pair, who will also play Stravinsky’s The Rite of Spring for dancer Raimond Hoghe’s performance Sacre, decided to undertake Vexations at the suggestion of festival director Lieven Bertels.

”Lieven likes – not to break down walls, but to open up new perceptions, and he said: ‘Why wouldn’t you go for Vexations?”’ Vandromme says. ”It’s a very enjoyable thing to do because you can really set down an atmosphere that you almost cannot create by any other work.”

As a composer, Satie was many decades ahead of his time; ambient music and trip-hop are just two recent forms that owe a debt to his ”furniture music”. He was also an intriguing character with an impish sense of humour. He wrote quirky directions into his music, asking, for example, that certain pieces be played ”in the morning, on an empty stomach” or ”hypocritically”.

The note on Vexations reads: ”In order to play the theme 840 times in a row, it would be advisable to prepare oneself beforehand, and in the deepest silence and stillness.”

Some believe this to be a joke on Satie’s part. John Cage, who discovered the manuscript while in France in the late 1940s, had the work performed to the letter of those instructions at a concert in New York in 1963. Admission cost $5, but audience members were refunded 5¢ for every 20 minutes they stayed. John Cale, who was one of the team of 11 pianists, wrote in his autobiography that ”it took 18 hours and 40 minutes” and that ”those who stayed to the bitter end got a 20¢ bonus”.

Vandromme believes the instructions are open to interpretation and that ”it’s up to us how to make it enjoyable”. Alex Ross, writing for the New York Times in 1993, noted that regardless of Satie’s intentions, ”the endless repetition has the virtue of focusing attention on the revolutionary nature of this music, its defiance of harmonic order”.

As Vexations was discovered after Satie’s death, there is much speculation about whether he intended it to have a meditative effect. What is not disputed is that it does – on both performer and audience.

”The extreme repetition induces a trance/hypnotic effect,” says Horvath. ”To [the public], Satie opens a zen-like travel, through space and time … On my side, you are meditating on the meaning of the piece, your life, the way you are behaving with your nearest one … it is a psychological experience – a strong one.”

Given the epic nature of the piece, Vexations is performed surprisingly regularly. It is mostly played by a team of pianists, as it was at the Cage 100 Festival last August in LA and San Francisco’s Berkeley Arts Festival in September.

Very few people perform it solo as Horvath does. He fasts for three days beforehand in order to prevent bathroom breaks from interrupting his performance. Vandromme and Franco will be doing something different again – each seated at a piano, they will be volleying the repetitions back and forth between them.

”We alternate between the pianos,” Vandromme says. ”I have to give it to Alain and Alain has to give it back to me. Playing [together] and finding how you can balance the sounds, that’s the tricky part.” Although Vandromme sees the performance as an antidote to the ”hectic energy” of the rest of the festival, he admits that ”you never know how people will react”. But he has a great deal of confidence in the composer’s work.

”The moment Satie is running, it’s incredibly impressive, so at that level I think people will just throw themselves into this wave of sound. That’s what we want to achieve.”