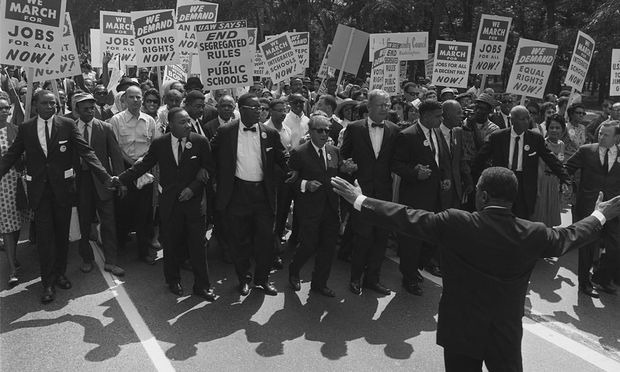 On August 28, the world should pause, and ponder, the timeless beauty and truth of the speech the Rev. Dr. Martin Luther King gave in front of the Lincoln Memorial to a huge crowd gathered on the National Mall in Washington, D.C. during the event that came to be known as “The March on Washington.”

Watch, and listen, to the speech as if you were there 50 years ago, and reflect on how far we have come as a nation and how far we still have to go to fulfill Dr. King’s dream.

I wonder if Dr. King had heard the words of Eleanor Roosevelt, who died the year before: “The future belongs to those who believe in the beauty of their dreams.” Not only was King’s dream a beautiful one, but it was beautifully expressed.

When I think of how there can be music in words, few quotations seem to be more musical, and more resonant, than what Dr. King said that day, “Now, I say to you today my friends, even though we face the difficulties of today and tomorrow, I still have a dream. It is a dream deeply rooted in the American dream. I have a dream that one day this nation will rise up and live out the true meaning of its creed: we hold these truths to be self-evident, that all men are created equal.”

In this paragraph, which is but one of many memorable ones in the speech not only for their meaning but their musicality, we notice the “Now” giving a moment of pause for the listener to perk up his ears. It is like a rest in musical notation. The “Now” also serves as a link to the words “today” and “tomorrow” as Dr. King created the context for his dream.

Notice that he does not say, “I had a dream” even though, in fact, he is recounting to the audience a dream that he had already had. By saying, “I have a dream” he puts it in the present, as something to be shared and worked toward. And he says the word “dream” four times in the space of 14 words, with a notable balance. The first and second mentions are three words apart, as are the third and fourth. The second and third “dreams” are five words apart. That is, we have a structure of 3-5-3, done so that the central concept of the discourse—Dr. King’s dream—was presented in a balanced yet deliberate way.

Look at the phrase to better understand the structure: “Now, I say to you today my friends, even though we face the difficulties of today and tomorrow, I still have a dream. It is a dream deeply rooted in the American dream. I have a dream that one day…”

Read the paragraph aloud as written above, from “Now” to “equal.” Do not try to speak it as Dr. King did but find your own rhythm and music in the words. This should open a window for you on how great oratory works. It did not happen just because of the words or of Dr. King’s soaring speaking style. He understood the musicality of language and how to use his eloquent baritone to bring the words across.

These ideas gestated in him for quite a while in such a way that, when they were spoken on August 28, they were uttered not only with sincerity but with true belief. He had expressed similar ideas in several talks in the weeks leading up to speech. With each rendering, he honed and refined, but did not fully take ownership of the words of his dream until Washington.

It was at one of these earlier speeches, in the spring of 1963 in Detroit, that he began to crystalize the central message of dreams. Listen to some the Detroit speech and you will hear how impassioned yet imperfect was the expression of his sentiments. He used the phrase “I have a dream” many more times than he did in the August speech in Washington. It is already quite powerful as text, but he had not yet found the music.

Somewhere, just as opera achieves greatness when words and music merge to create something new, Dr. King’s beliefs became more stirring when he found the music and rhythms in what he was trying to say. As I have described elsewhere, Dr. King loved gospel music. It seems that a certain point, as he tried to fashion the speech for which he became legendary, he discussed with his friend, the mighty gospel singer Mahalia Jackson, how he came to his ideas.

On August 28, Dr. King recited the first seven paragraphs of a prepared text. Jackson, who had an ear for music and a sensitivity to what moved an audience, was on the stage because she had just fired up the crowd singing “How I Got Over” just before Dr. King spoke. Watch Mahalia to know what Dr. King had heard:

I think Jackson felt that, important as the written words were that King recited, he needed to take things to the next level. She said, “Tell them about the dream, Martin.” He took a brief pause, evaluated the moment, and put aside the notes. As he spoke extemporaneously, and from the heart, the various iterations of his dream came forth in the concentrated and spectacular way that we all know today.

A day after I had written the two paragraphs above, I came across a recent video document from the Wall Street Journal in which Clarence B. Jones, adviser and former speechwriter for Dr. King, recounts Mahalia Jackson’s key contribution to that speech. Watch it:

King knew something about opera, even if he probably did not have time in his busy and brief life to attend it much, if at all. His future wife, Coretta Scott, studied opera singing in Boston and the young reverend moved there to be near her. Surely Coretta explained to him the magic of opera and that it too can be a vehicle for dreams.

Wagner composed two important dream arias. “Elsa’s Dream” in Lohengrin, is of a woman who prays and hopes for salvation from a noble man. In Senta’s Ballad, sometimes called “Senta’s Dream,” from Der fliegende Holländer, she recounts the dream in which she envisioned a man on a ship who would come to save her and whom she would save. This message of saving one another would have appealed to Dr. King.

I do hope that Dr. King had the pleasure, at least once, of hearing Leontyne Price sing the “Bel Sogno di Doretta” (Doretta’s Beautiful Dream) from Puccini’s La Rondine:

It was John Barrymore, of all people, who once said, “A man is not old until regrets take the place of dreams.” The early death of Martin Luther King was a tragedy for his family and the entire world. To me, the great astonishment of Dr. King’s speech on August 28, 1963, apart from the speech itself, was that the man who gave it life and reshaped the United States and the entire planet, was only 34 years old.