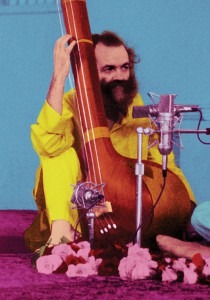 La Monte Young has a different relationship to time from the rest of us. His music goes on for a long time — that’s objectively true, and it feels even longer if, like many people, you find it boring.

He’s credited as the vastly influential father of minimalism because when he was 22, in 1958, he wrote the first piece that held notes for a long period, suspended in air to allow examination and contemplation. His best-known work, The Well-Tuned Piano, is a solo performance that has grown in length from three and a half hours to five to, last time he played it, nearly six and a half. (It would have been longer, but he rushed a few parts.) When he was young, Young shocked Karlheinz Stockhausen by strolling in two hours late for the intimidating composer’s morning composition class in Darmstadt, Germany. For some time, Young lived on a weekly cycle of five 33.6-hour days. Lately, he stays awake for 24 hours, and then rests for 24. Full story.