Media
Military Funding vs. Funding for the Arts: What Does the Difference Say About American Values?
June 29th, 2012
Tags: destinations 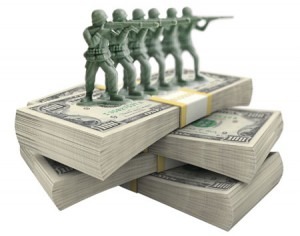 During World War II, Britain’s finance minister recommended to Winston Churchill that they cut arts funding in order to better support the war effort. Churchill’s reply was, “Then what are we fighting for?” This remark resonates with an enormous difference in values between the U.S. and Europe.

I studied at a theater school in Brussels for two years. The difference in the way that Europeans value art was striking to me. There, going to the theater, even avant garde, experimental theater, tends to be a weekly affair for many families. This is made accessible by subsidies for the cost of tickets, which tend to be less than 10 euro, less than movie tickets. Moreover, arts festivals, neighborhood community art schools, as well as ubiquitous sculptures, paintings and other works of art contributed to my sense that art permeates the culture there; that art in Europe is valued not as a luxurious product of their civilization, but rather a necessity to maintain and cultivate their civilization.

The European Union recently revealed that it has begun the world’s largest ever arts-funding initiative: Creative Europe will give 1.8 billion euros ($2.4 billion) to over 300,000 artists. The initiative is at least in part an economic measure; ensuring artists have work, while also developing their means to reach broader audiences and therefore new markets.

In stark contrast to that initiative is the recent budget the U.S. Congress passed for the National Endowment for the Arts: $146.255 million. That’s $9 million less than the 2011 budget. Italy’s government grants for its largest opera houses alone is 10 times larger than the NEA’s current operating budget. The U.S. government’s total spending on arts and museums is staggeringly minute compared to its European counterparts.

Perhaps in these difficult times, funding for the arts may seem frivolous or luxurious. However, the nonprofit arts industry generates $166.2 billion in economic activity annually for the U.S. economy, supports 5.7 million full-time jobs, and returns $12.6 billion in income tax revenue back to the federal government. Let me just reiterate:

Many of these jobs are local businesses created for the audiences that the concerts, museums and theaters draw. Moreover, with aesthetic improvement to the infrastructure of communities, the Arts attract greater local investment through businesses, tourists, and high-skill workers.

The profitability of art is supported by NEA research which asserts, “Every dollar that the NEA gave in grants typically generated seven to eight times more money in… earned revenue. A $100,000 grant… delivered $800,000 in eventual funds to an organization.”

The arts have also proven to be a powerful force in education. A recent report from the White House found that “integrating arts with other subjects is particularly effective at raising scores in math and reading.” Many studies have proven arts effective at improving students critical thinking skills, cognitive ability, and interpersonal communication. Furthermore, while the arts are readily available to children of wealthy communities, they are often unavailable to children in lower income communities. Arts education in public schools helps to balance this difference.

Nevertheless, arts education budgets are facing similar cuts as the NEA and have been for the past 30 years.

Recently, the Republican Study Committee unveiled The Spending Reduction Act of 2011. The act would completely eliminate the NEA’s budget. This thinking is not a new development. In 1994, Newt Gingrich proposed cutting the NEA’s funding by 50 percent, and hoped to go further, completely privatizing the NEA. Similarly, Mitt Romney claimed that as president he would “enact deep reductions in the subsidies for the National Endowment for the Arts” and his campaign later asserted that he would cut the funding for the NEA in half.

If the arts are an economically viable resource, and source of full-time jobs, why are they marginalized by our society and threatened by legislators? Is it as simple as the conviction that profit should be the ruling factor in our country’s values? If that is true, how then do we explain the military?

The U.S. government’s greatest expenditure is the Department of Defense, and defense-related programs. The 2012 budget request for the Department of Defense asks for $707.5 billion dollars. However, when all defense related expenditures are tallied, the total defense budget comes to between 1 and 1.4 trillion dollars, which makes defense over half of what the U.S. spends tax dollars on. All told, the U.S. accounts for 47% of the world’s military spending with a budget the size of the next 15 highest spending nations combined (12 of which are U.S. allies).

The majority of this spending is in contracts to private corporations, with Lockheed Martin at the top, which received $40,252,661,676 in 2011 from the U.S. government. Well, such investments of public money seem sound, if the return to the American taxpayer is the most profitable option.

However, the Congressional Budget Office found that every $10 billion spent on weapons generates 40,000 fewer jobs than the same amount spent on civilian programs. This data is especially poignant considering that cutting civilian spending financed much of the military’s infrastructure.

Speaking of cutting civilian spending, let’s return to the NEA. The budget for Military marching bands alone is almost twice as much as the entire NEA. Less than .05% of the defense related spending in this country could pay for 150 fully staffed opera houses with year-round programs, employing thousands. The same sum could support 300 spoken word theaters at $15 million a piece. It could subsidize 20 full-time symphony orchestras at $20 million a piece, and give over 80,000 composers, painters and sculptors a yearly salary of $50,000 each. If that is only .05% of the military budget, what then could a full 1% do?

Certainly there is a forceful argument for a strong military presence in the world, but our current state of spending is clearly out of balance.

Non-profit arts are, by definition, not America’s greatest source of profit. But they have a unique power to bring communities together, provide them a voice, and create bridges of shared understanding and appreciation between individuals and cultures. They can educate and help us to appreciate our world, but perhaps most importantly they help us help us to imagine an even better world. The European Cultural Foundation states that art “engages and inspires people to transcend boundaries” and are essential” for creating open, inclusive and democratic societies.” What greater good is there?

Winston Churchill, in a time of war, saw that the arts were the voice of his people; the soul of his civilization, and the very expression of what is was to be a British citizen. If we as Americans are so willing to grossly over-fund our military and defund our arts, our deepest expression of ourselves both at home and abroad is simply an expression of war. Instead of cultivating unity and transcendence of boundaries throughout the world, we are propagating a world at war.