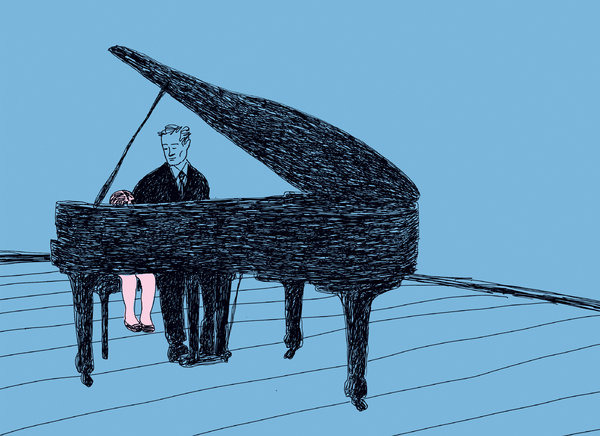 ON a recent Sunday, I found myself in a small performance space in Brooklyn, wearing a jacket, which I rarely do, surrounded by 9-year-olds, and feeling more than a little anxious. I was 48 years old, and I was performing in my first piano recital.

I was not, until recently, a musician, though music runs in my family. Back in the 19th century, in Belarus, my great-great-grandfather was a cantor. One of my brothers is a music teacher. A cousin is the violinist in the rock band Ra Ra Riot.

But my own memories of music lessons are far less glamorous. As a child I took flute lessons for a year, but I couldn’t get much sound out of the instrument (my teacher kept telling me to make a fish face, but try as I might, I couldn’t become a fish), and so I graduated to the recorder, and then the guitar, but soon I dropped those, too.

Did my music lessons enlarge me? Did they make me smarter? Happier? More fulfilled? My parents took it on faith that they did, that playing an instrument was good for you, the way learning French was, or keeping my nails clean.

But I had my doubts. What I remember most clearly is my parents’ reminding my brothers and me to practice, and the sound from down the hall of a screeching violin.

And then my daughters turned 5 and 7, and I found myself asking, “Would you like music lessons?”

The following year, I had a sabbatical from my teaching job, and I wondered what I might do to mark it. I could learn German, I thought. I’d always wanted to speak German. Or I could take piano lessons. I’d be 50 before long, and everywhere I turned the neuroscientists were agreeing: try something different. Pick up a new trade. It was good for the brain cells.

It might also, I thought, be good for the soul. I had spent much of my life being a teacher. It wouldn’t be such a bad thing to be a student for once.

And it would give my daughter and me something to share. We could talk about our C-major scales and our G-major scales, about treble clefs and bass clefs, about whatever it was that piano players talked about.

I asked my daughter’s piano teacher if she knew instructors for adults.

“I teach adults,” she said.

And so I began to study the piano. Every Wednesday I arrived at her apartment and sat in front of the same piano where my daughter sat. Notwithstanding all my years of lessons, I couldn’t read music. And I didn’t have parents to remind me to practice. My father was dead, and my mother had better things to worry about.

A year later the question came. Would my daughter and I like to play a duet together? Did we want to perform in the fall recital?

My daughter’s answer was an immediate yes.

She chose the piece of music, “Hot Popcorn!” which did in fact sound like popcorn popping, and we sat down to practice. Sometimes we did well and sometimes we did less well. Occasionally we did so badly we stopped midpiece and my daughter would start to laugh. “We better not screw up at the recital,” she said.

I thought of the first George Bush, who, when his son was struggling as president, confided how much harder it was to see your child suffer than it was to suffer yourself. This was true, I thought. Our children’s disappointments weigh more heavily on us because they’re out of our control.

That day, my daughter and I made it through “Hot Popcorn!” without laughing or having to stop. On a scale of 1 to 10, I’d say we were a 5. My daughter started late, and for much of the piece I was a note off.

Afterward, when I congratulated her and took her in a hug, she said, “We kind of messed up.” But she was smiling, because, really, who noticed in the end if you started a little late or if your father was playing off-key?

After school the next day, when it came time for practice, she suggested we play our duet.

She didn’t seem to care. She wanted to play the piece for fun. She was sitting on the piano bench, and as she looked up at me she tapped her hand against the bench as if to say, O.K., now sit down.