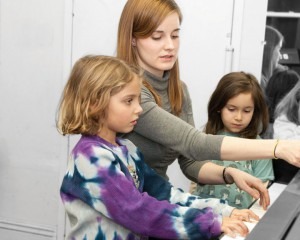 Lapsed musical instrumentalists (and their disappointed parents): Take heart! The child that gets even a few years of formal musical training before quitting those weekly lessons continues to show evidence that his or her brain has been changed in ways that improve mental function, says a new study.

The latest research found that even years after they stopped practicing, young adults who had taken as little as two or three years of instrumental music training in their elementary or middle-school years showed a more robust brain response to sounds than those who had no formal musical training. The study compared 30 former instrumental students to 15 young adults of similar age and intelligence who had had no music training.

The echo of music lessons past began to fade as adults grew more distant from their days of piano (or cello, trumpet or saxophone) lessons. But it was still there an average of seven years later, and whether the subject had taken three years of instrumental training or eight did not seem to make much difference in the strength of the effect.

The heightened neural response to sounds in a lab means something in the real world, past research suggests: Prior research has linked the kinds of brain signals seen in those with musical training to heightened auditory perception, better auditory-based communication skills and improved executive function. The last of these — executive function — encompasses such key learning skills as attention, organization, short-term memory and reasoning. So boosting that in enduring ways could arguably give the kid who took music lessons an academic edge for years after the lessons ended.

The study also suggests that formal musical training was not wasted, even when your budding Yo-Yo Ma or Lang-Lang gives up the lessons in favor of, say, basketball, cheerleading or socializing. It does suggest that starting early in life and quitting late may confer a more lasting mental advantage. But even “a little” formal musical training, say the authors, “goes a long way.”