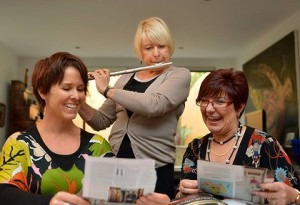 And if it were up to entrepreneur Sally Arnold, who uses some of the greatest classical composers to inspire creativity, offices would also be filled with music to help stimulate and soothe stressed out workers.

“I’m doing my best to get it out there because … we know that music changes people,” she says.

Arnold believes music is under-valued as a business resource, but can have the same effect it does for athletes seeking motivation, in developing the minds of babies and in treating the sick or elderly.
Advertisement

In her previous role as corporate development manager with The Australian Ballet, Arnold regularly witnessed the impact music had on business leaders, who arrived at the opera stressed but left energised and clear-headed.

“It was like being in a creative incubator. I thought ‘How do I bottle this?’ I couldn’t just keep people going to the opera,” she says.

“But I’ve got a music background and a business background so I studied psychotherapy so I could understand myself and other people. Then I realised I wanted to work with businesses and individuals to help them move their business much further along and to look outside the square.”

Arnold established her business, Corporate Creative Directions, seven years ago, and is finding people are more willing to embrace music to help grow their business, or to achieve their own personal goals. In her sessions she uses music to help people visualise what they want to achieve or to reconnect to a stage in their lives when they felt fulfilled, and then create a plan to realise their aims. The businesses she usually works with are established, but in need of a creative spur.

Arnold insists every client she comes across has the answers they seek inside them, and can draw on the right side of the brain – the creative side – with the music as a prompt, similar to the way people can feel uplifted hearing their favourite song on the radio.

Naturally, the right music is critical. Invariably it’s classical and a piece with a consistent rhythm. Part of Arnold’s job is to select the right piece to capture the mood of the group.

The right music, she says, prompts positive thoughts, as the feel-good endorphins released inside the brain help stir creativity. “You’d never use one of Wagner’s operas, they’re quite dramatic and full of people killing themselves, so that would have the wrong effect,” she says.

Arnold says Australia has traditionally taken too long to embrace innovative ideas such as the one her business is based on, although believes people are now more open to adopting different strategies to get ahead of the competition.

As a former professional flautist, music has been a constant in Arnold’s life, and in her sessions she also encourages people to use it more in their everyday lives. For all its profound effects, she says she often wonders why music isn’t a bigger part of most people’s lives.

“This is my quest. That is is the reason I’ve set up this business. I just believe in it so much,” she says.

“When you’re a musician and you’re so close to it you don’t realise the effect it has.”

“I think they’re their own worst enemy and I was around a lot of them when I was a musician.”