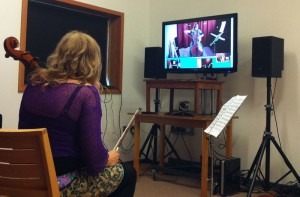 When it comes to enjoying music, there are more listening options than ever before. Whether you prefer the old school record or something more contemporary like MP3s or a streaming service, the fact is, music is so easily accessible that it’s just about impossible to imagine a time when you actually had to attend a live performance to hear delightful melodies. Yet in the not-so-distant past, that was the case.

So, though listening to music has changed drastically over the past century, what about creating music? While there have definitely been developments in instrument technology, music creation has remained largely the same; you grab your instrument, get together with your fellow musicians, if not working solo, and start jamming and brainstorming song ideas. But is there a way to create music and collaborate with other musicians without the need to be in a studio together? Yes, through the wonderful technology of video conferencing.

So what can video conferencing do to help you create new music with other musicians? It can completely remove the oftentimes frustrating need to pack up all your instruments and gear to meet up with your fellow musicians in a studio or other location.

The option to use video conferencing services like those offered by BlueJeans as a method to connection with other musicians in an effort to creation new works hasn’t always been the most viable in the past due to technical hindrances. But, as high-speed Internet and other breakthroughs in Internet connectivity and speed have been introduced into the market, video conferencing has become an excellent choice for collaborating with fellow musicians across the globe. According to The Chronicle of Higher Education, the problem in the past was with latency and lag, where you would play a note, but it would take a few seconds to reach the other person and vice versa when they responded. But new developments in Internet tech has brought those lag delays to as low as 35 milliseconds in some cases! This lightning-fast connection time completely removes any sort of delay, so when you’re jamming out with your music buddy across the ocean, it’s like you’re in the same room.

Video conferencing is also incredibly useful in helping musicians rehearse pieces already composed. The lack of any real delay in relaying sound between both ends means it’s possible to have an entire jam session or rehearsal over the Internet without any worry of falling out of sync with each other.

While listening to music is a delight, especially when it’s your favorite band or song, and playing music can be euphoric, exhilarating, or any other emotion you can name, learning to play an instrument isn’t just a means to develop a hobby. Learning to play an instrument can have positive lasting effects on your brain. According to USA Today, children who learn to play an instrument have improved abilities to hear and process sounds and noises they may not have even detected otherwise. And while learning to play music might not actually boost you or your children’s IQ, National Geographic states that more and more studies are finding connections between music training and a reduction in memory loss, cognitive decline, and diminished ability to distinguish spoken words and other sounds in later life.

So learning to play music is good for you and your brain, but how can video conferencing help? Via expanding the reach of music teachers and classrooms. As outlined by a Scotia UK case study, video conferencing has allowed 120 schools in the Dumfries and Galloway Council Region to expand their classroom’s reach internationally, allowing students to participate in music lessons hosted by the Manhattan School of Music in New York, among other academic fields.

Reaching Beyond the Auditorium

If you haven’t already looked into what video conferencing can do for your music career, it’s high time you started seeing what the technology can do for your band or other musical group.