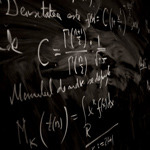 HUMANS ARE obsessed with structure and the search for reason in randomness. This is as true for artists and musicians as it is for mathematicians and for this reason maths often underlies creative endeavours.


Just how intertwined with mathematics painters, writers and choreographers can become, was discussed last night at the RDS in Dublin in a talk by Prof Marcus du Sautoy of the University of Oxford.

There is an “interesting dynamic” between artists and mathematics said Prof du Sautoy OBE, who is Oxford’s Simonyi Professor for the Public Understanding of Science. He was speaking yesterday in advance of his RDS lecture last night entitled ‘The Secret Mathematicians’.

In it, he showed how composers, painters and architects could draw inspiration from the structures produced within mathematics. Some did this overtly, finding ways to incorporate maths into their creative efforts, while others applied mathematical concepts without doing so consciously, Prof du Sautoy said.

He applied prime number 17 to establish the rhythm, and 29 for harmonics – a combination that ensured these never quite get into synchronisation. This in turn produced unusual musical effects. “Messiaen knew what he was doing,” Prof du Sautoy said.

Artist Salvador Dali was also mentally attuned to mathematics, Prof du Sautoy added. “He was very deliberately exposing himself to scientific ideas,” and said he would rather be among scientists than artists.

Other artists were simply attempting to build structure into their works without consciously applying mathematical constructs. Yet the end results could be the same, hence his description of these creative people as “secret mathematicians”.

It was not just an attempt to use mathematics as a different form of expression but using it as a way to “find something beautiful and interesting”, Prof du Sautoy said.

“It is all part of a human obsession with structure. We are looking for structure that somehow gives our world meaning,” he said.

The maths became valuable to an artist because it added to the beauty of the end result. Maths could add to the aesthetics of what these artists were creating, and for this same reason mathematicians were also attracted to the beauty and simplicity of what they discover.