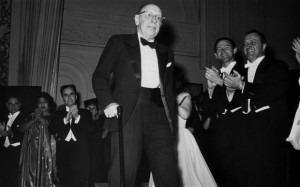 What makes for greatness in classical music? My colleague Damian Thompson had some fun with this question in his Saturday column. He declared that only pompous music lovers say you can’t rank classical composers into best, good, and indifferent. Making rank orders of different human types is harmlessly entertaining, and something we do all the time.

It’s true that ranking composers ought to be just a bit of fun, but it’s astonishing how touchy people get on the subject. A few weeks back I dared to suggest Ravel might not be in the front rank of composers. This attracted a barrage of protest from various musicians and composers. What was strange was the tone of personal resentment, as if by casting doubts on Ravel’s greatness I’d attacked them personally. This is silly. I have a great fondness for Erik Satie, and find some of his works intensely moving, but I’m not going to claim he’s a great composer. He’s not even a very good one.

Everyone will surely agree on that. And most people would agree with Thompson’s list of Premier League composers: Bach, Beethoven, Mozart, Haydn, Schubert, Wagner and Bruckner. Stravinsky slips into Championship division, as do Chopin, Mahler and Schumann. Further down in League One come Shostakovich and Prokofiev.
Thompson says there’s no science of ranking composers, and that it’s all individual choice guided by social consensus. But is all that guides us really just a fear of looking silly at a dinner party? I think Thompson’s list shows that greatness isn’t something ineffable. It’s something you can discuss rationally, provided you don’t go misty-eyed and start talking about whether a composer has “soul” or not. That’s just a different way of saying “he’s great”, which gets us nowhere. I reckon there are five reliable markers of a great composer. Here they are:

1) A great composer must also be a good one. That means having a proper technique, which immediately raises a problem for all those recent or living composers who might be a candidate for greatness. In recent times the common musical language of classical music has collapsed. But without a common language, how do you judge whether the technique really is good? (as opposed to just being very clever).

2) Minor but good composers tend to fall into one of two traps: either their music is perfectly focused, but narrow in scope, or it’s vast in aspiration, but foggy and confused in execution. As an example of the former category I’d name Ravel, in the latter all those composers whose reach exceeded their grasp, like Havergal Brian or the Danish visionary Rued Langgaard.

3) Great music has to appeal to a wide cross-section of a culture, not a small coterie within the culture (and yes, I realise that those words “culture” and “coterie” beg huge questions). Following on from this…

4) A great composer is marked by a great total output, and what makes an output great is not a handful of exquisitely turned masterpieces, but compendiousness. It should be greater than the sum of its parts, and make room for heroic failures, trifles, and interesting but flawed experiments, as well as masterpieces. Beethoven’s charming little Septet is as essential to his greatness as his late quartets.

5) Great composers soar above the normal requirement to have a “personal voice”, that thing we so prize in all the arts. A lot of minor composers have an instantly recognisable personal voice, and in a way that’s their problem. The liberating thing about the great composers is that they keep doing things which are out of character. They “contain multitudes”. Mozart sometimes sounds like Bach, Bach sometimes sounds like Frescobaldi or one of his own sons, and Beethoven seems to foreshadow an awful lot of what came after him, from Chopin to Albeniz to boogie-woogie.

This (pace Damian Thompson) is why I place Stravinsky among the great composers. You recognise his music instantly, and yet he’s never purely himself. His music always embodies something else as well, whether it’s perky neo-classical Bach, or sombre Renaissance counterpoint, or jazz. And Stravinsky also passes the “shallow and deep” test too – though where exactly “shallow” and “deep” lie in his music isn’t at all obvious. It’s wrong to say that Stravinsky’s brilliant and joyous Violin Concerto is less “deep” than his stark and awe-inspiring Symphony of Psalms, just as it’s wrong to say that Bach’s fabulous orchestral suites and Art of Fugue are less deep than his cantatas. Stravinsky’s amanuensis Robert Craft once wisely said that Stravinsky’s deepest moods and his deepest music are not the same thing. Which is true, but it’s also true of every great composer who’s ever lived.