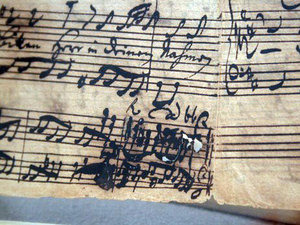 J.S. Bach's Cantata No. 171 is part of the Lehman Collection. The iron-gall ink Bach used to compose the piece has eroded the paper.
Photo: Caroline Cooper

For music lovers, some melodies may seem priceless. But if you ever wondered what music is really worth — like the original manuscript to Maurice Ravel’s Bolero? That score and about 200 more, which reside at New York’s Morgan Library, are on sale for $135 million. They are part of the esteemed Lehman Collection — a group of nearly 200 scores that reads like a greatest hits of classical music. Christoph Wolff, a professor of music history at Harvard, calls it “the trophy collection.”

“If you look at the list, you have Bach manuscripts, you have Mozart, Beethoven and Schubert, you have Chopin, you have Debussy, Strauss, Bartok and Schoenberg. You know, there isn’t anything like it, especially when it comes to the selected items that are really major works in the history of music,” Wolff says.

The trove belongs to Robert Owen Lehman, a member of the famed Lehman banking family. He has collected original music manuscripts for decades, and he keeps many of them on deposit at the Morgan Library. Now he’s looking to sell this collection. The $135 million price tag would make it, by one estimate, the most valuable private music manuscript collection ever sold. Much of the value is in the distinctive marks on the documents: side notes and scratch-outs from the greatest musical minds. For scholars like Anne Schreffler, chair of Harvard’s music department, nothing compares to studying an original.

“Just the way a composer notates music can be significant,” she says. “So even if they don’t make changes, just seeing how they beam notes — whether the beam goes up or down, whether the notes are connected or separated, those kinds of things can give you insight into the musical structure. And when these pieces are published and printed, publishers have their own guidelines and rules, just as with printing of books. So certain aspects of the notation are always standardized. But in a manuscript, you can see a composer’s idiosyncratic notation.”

Lehman has two conditions: The collection cannot be broken up, and it must remain on display in a public institution. Thomas Venning, the director of manuscripts at Christie’s in London, says it could be hard to keep the collection intact, adding that it’s easier to realize value for one manuscript at a time than it is for an entire collection at a time.

Individual manuscripts have sold for large sums. Beethoven’s 9th Symphony sold in 2003 for $3.4 million. Mendelssohn’s “Hebrides Overture” fetched nearly $1 million at auction. But an asking price of $135 million makes the Lehman Collection a tough purchase for any one individual — or institution. So John Lubrano, the man in charge of finding the collection a new home, is pursuing a group of buyers. He’s hoping they’ll go in on the sale together and then donate it to a museum, library or other public institution.

Lehman hasn’t announced anything, but a letter circulated to a group of wealthy New Yorkers suggests that he may use money from selling these music manuscripts to set up an organization dedicated to music education and performance.