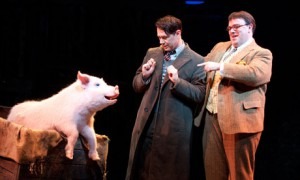 Long gone are the happy days when the musical was a source of innocent pleasure. They have become cultural juggernauts, devoid of risk-taking and, like the banks, too big to fail

Musicals are the dominant theatrical form of our generation. There are 21 of them running in London’s West End. Many more can be found in regional reps and touring theatres. They also make big money: it’s estimated that Cats and Les Misérables between them have taken more than three-quarters of a billion pounds at the box office. Why then, even in a week when the Critics’ Circle is poised to give Stephen Sondheim a lifetime achievement award, do I persist in thinking the musical is a form in crisis?

For a start, let’s look more closely at the shows currently on in London. Several of them – The Phantom of the Opera, Les Misérables, Blood Brothers – are part of the theatrical landscape. Many others, such as Ghost, Shrek, The Lion King, Singin’ in the Rain, The Wizard of Oz and Billy Elliot – derive from existing film hits. The others can be classified either as jukebox musicals (We Will Rock You, Rock of Ages, Thriller, Jersey Boys) or revivals of established classics (Sweeney Todd). That leaves one genuinely new “book musical”, Matilda, which, although based on a Roald Dahl novel, does not derive either from a movie or a composer’s songbook.

I’m not saying that any of the above shows are bad or don’t deserve their popularity – far from it. But there’s something unhealthy about a genre that persistently fails to generate exciting new work. I haven’t been to New York in some time so I can’t pronounce on the merits of acclaimed show The Book of Mormon. I also missed London Road at the National which I’m assured opened up new possibilities for the verbatim musical. But I did see Betty Blue Eyes in the West End, which I thought improved on the Alan Bennett it sprang from, and which had a first-rate score and lyrics by George Stiles and Anthony Drewe. Lacking showbiz pizzazz or a big star, it nonetheless had a depressingly short run.

This is the real problem. There seems little room any more for a musical that is not some form of cultural juggernaut or that trades on wit, lightness and charm. As a student in the late 1950s, I remember coming up to London to write a piece on musicals and delighting in such shows as Frank Loesser’s The Most Happy Fella and David Heneker’s Make Me An Offer, which hailed from Stratford East. At that time I also assiduously collected LPs of Broadway hits such as Leonard Bernstein’s On the Town and Wonderful Town (about to be revived at the Lowry in Salford). But those happy days when the musical was a source of innocent pleasure seem far off. Nowadays musicals have become so industrial in scale and expensive to produce that any form of risk has to be minimised fom the start. Like the banks, musicals have become too big to fail.

What can be done? I recently wrote a magazine article suggesting that prohibitive production costs were stifling the emergence of new talent. I proposed that an enlightened producer such as Cameron Mackintosh might subsidise an annual public showcase for new musicals: something like the old Royal Court “productions without decor”, where the money went on the talent rather than on sets and costumes. Imagine my astonishment when Cameron bustled up to me recently at a big social do and said he had been planning just such a venture for some time.

It’s early days yet but Cameron’s idea seems to me the only way of rescuing a form in crisis. Musicals continue to pour off the assembly line: there is talk of a Spice Girls show and of new versions of hit movies such as The Bodyguard and The Commitments. But none of this is breathtakingly original. And, unless the musical can discover new composers and lyricists to succeed the Andrew Lloyd Webber and Stephen Sondheim generation, it will soon become a glittering coffin.