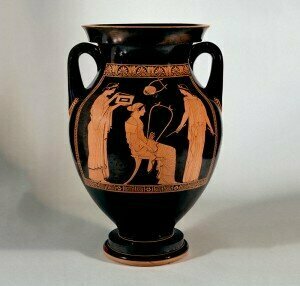 At the beginning of Homer’s Iliad, the Greeks besieging Troy are struck down with a plague in punishment for Agamemnon’s stubborn refusal to return Chryseis to her father, a local priest of Apollo. After nine days, so many have died that Achilles, the leader of the Myrmidons, summons the army to an assembly and the prophet Calchas warns that, unless the girl is handed over, disaster will surely follow. Reluctantly, Agamemnon agrees to back down; and as soon as Chryseis is released, her father duly asks Apollo to end the Greeks’ suffering. Sacrifices are offered and the Greeks sit down to a celebratory meal. Once they have all eaten their fill, they then fill their cups with wine, and, after the customary libations, give themselves over to music: Full story.