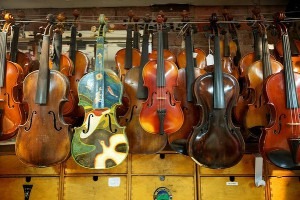 A collection of Puglici's finished instruments

BENEDICT Puglisi, the only specialist double-bass maker in Australia, is racing out the door to do emergency instrumental surgery when The Age first calls to speak to him about winning the top medal at a prestigious global competition in San Francisco recently…

Flying instruments around the world is fraught at the best of times, so basses – the Matt Prestons or Joe Hockeys of the musical world – are often borrowed by international musicians for local gigs. Puglisi has been called to make minute adjustments to a bass he lent to a musician with the Danish orchestra Concerto Copenhagen for a performance at the Melbourne Recital Centre.

Jazz legend Ron Carter reportedly loved the bass when he played at the Jazz Festival recently, but it needed “a tenth of a millimetre of wood” off the bridge to sound like a true baroque instrument for the Danish bassist, is Puglisi’s diagnosis the next day.

The in-demand double bass is a twin of the one the Hawthorn-based craftsman picked up top prize for tone with at the International Society of Bassists Convention on June 7. The prototype was such a triumph, Puglisi made a second to enter in the prestigious competition – but it almost didn’t make it.

Held up by US customs (suspicious it was made from endangered timber), the bass was released and arrived at the competition only after the judges had already determined the medal winners.

The competition is held every two years and only accepts instruments crafted in the previous 12 months. “I was pretty down watching other people get clapped as they got their awards,” he says.

The next day, Puglisi attended a packed concert of the award-winning instruments, devastated that his sourcing rare and superb maple wood, ageing it for 10 years, then working 65 hours a week for nine months to craft it had ended in farce. “Then [the judges] announced a unanimous decision that the bass be entered, and they give it the highest medal – a silver – for tone.” (Gold is only awarded to instruments that win silver for both tone and craftsmanship.)

“It’s a big deal in the bass world because it’s a showcase event,” says Steve Reeves, the principal double bassist with the Melbourne Symphony Orchestra.

The bass, which would have cost about $6000 in materials alone, is for sale for about $US29,000 ($A27,500) in New York. Puglisi, who completed two long apprenticeships in Melbourne and Cambridge in Britain, and says he can go for 12 months without selling an instrument, is reluctant to calculate the price of his labour.

“It would take the fun out of it; I really don’t want to know the dollar cost,” he says. “It’s not a money-making project – it’s a passion for the instrument and the craft.”