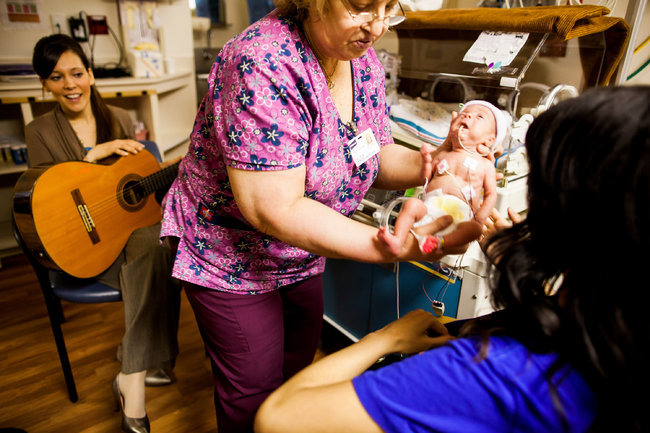 Even the Beatles would have had trouble recognizing their peppy song in the lullaby that Andrea Zalkin sang to the tiny, fragile baby clutched to her chest in the neonatal unit. But there was something unintentionally poignant in the title she chose for her son: “Eight Days a Week” is more time than can fit on the calendar. Ms. Zalkin’s baby, Hudson, born 13 weeks early, has had too little time.

As she sang, monitors showed Hudson’s heartbeat slowing and his oxygen saturation increasing. Effects like that were among the findings of a new study on the use of music as medicine.

Beth Israel Medical Center in New York City led the research, conducted in 11 hospitals, which found that live music can be beneficial to premature babies. In the study, music therapists helped parents transform their favorite tunes into lullabies.

And while the effects may be subtle, small improvements can be significant. Premature births have increased since 1990, to nearly 500,000 a year, one of every nine children born in the United States.

The study, published Monday in the journal Pediatrics, adds to growing research on music and preterm babies. Some hospitals find music as effective as, and safer than, sedating infants before procedures like heart sonograms and brain monitoring. Some neonatologists say babies receiving music therapy leave hospitals sooner, which can aid development and family bonding and save money.

Dr. Thomas Truman, the director of neonatal and pediatric intensive care at Tallahassee Memorial Hospital in Florida, which was not involved in the study, said infants who had music played to them went home earlier “at least by a couple of days, compared to babies that weren’t getting music therapy.”

The music, he said, “helps decrease their stress response” and “really devote more of their oxygen and calories to developing and growing.”

One reason may be that music is organized, purposeful sound amid the unpredictable, overstimulating noise of neonatal units. “Loud machinery, medical rounds coming through with 12 people, alarms on ventilators and pumps, the hiss of oxygen,” said Helen Shoemark, a music researcher at Murdoch Childrens Research Institute in Melbourne, Australia. “Sound can be damaging. But meaningful noise is important for a baby’s brain development.”

Scientists are far from done determining music’s impact, and there are certainly those who are skeptical about its medical value.

Dr. Manoj Kumar, a neonatologist at Stollery Children’s Hospital in Edmonton, Alberta, said that while “studies have shown a benefit in heart rate and respiratory rate,” it is unclear whether that prompts clinical improvements, like removing oxygen or feeding tubes sooner, questions that the Pediatrics study did not tackle.

Over two weeks, 272 premature babies underwent several sessions of two instruments, singing and no music at all. The instruments and lullaby singing style were intended to approximate womb sounds, said Joanne Loewy, the study’s leader and the director of Beth Israel’s Louis Armstrong Center for Music and Medicine.

Two-tone heartbeat rhythms were played on a “gato box,” a rectangular wooden drum. Whooshing sounds came from an “ocean disc,” a cylinder containing shifting metal beads. For melody, parents were asked for a favorite song. If it wasn’t a lullaby (someone chose “I Heard It Through the Grapevine”; another, “Pick Up the Pieces,” by Average White Band), therapists slowed it, changed meters to lilting waltzes and adjusted lyrics.

“Lots of times you see parents bopping the baby up and down on their lap, and there’s no purpose to it,” Dr. Loewy said. “You don’t feel the music intention as much as if you have a song that a parent has chosen.”

If parents did not specify, researchers used”Twinkle, Twinkle, Little Star.”Tempos were coordinated with babies’ vital signs, indicated not only by monitors but also by eye movements and a chest’s rise and fall.

Researchers found that the gato box, the ocean disc and singing all slowed a baby’s heart rate, though singing seemed to be most effective. Singing also increased the time babies stayed quietly alert. Sucking behavior improved most with the gato box. The breathing rate slowed the most and sleeping was the best with the ocean disc.

Dr. Loewy, who trains therapists worldwide, said it did not matter whether parents or music therapists sang, or whether babies were in incubators or held. So they would not have to buy the instruments, parents were taught to mimic them.

Dr. Lance A. Parton, associate director of the regional neonatal intensive care unit at Westchester Medical Center’s Maria Fareri Children’s Hospital, which participated in the research, said it would be useful to see if music could help the sickest and most premature babies, who were not in the study.

“There’s definitely a big buzz about music therapy,” Dr. Parton said. “It used to be only academic ivory tower institutions. But with all the high-tech things we can do for babies, there are many low-tech things — and music therapy is part of that.”

“Live music is optimal because it’s in the moment and can adapt to changing conditions,” Dr. Standley said. “If the baby appears to be falling asleep, you can sing quieter. Recorded music can’t do that. But there are so many premature babies and so few trained live producers of music therapy that it’s important to know what recorded music can do.”

At Beth Israel, Ms. Zalkin, who said she had discovered that she was pregnant only a week before giving birth in March, said it can feel overwhelming to suddenly have a baby, let alone one who weighed 2 ½ pounds when born. She joined Beth Israel’s music therapy program after the study ended.

“With the beeping and the scary noises and the people running around, that’s something that I can’t change,” Ms. Zalkin said. She chose “Eight Days a Week,” she said, because “I grew up on the Beatles.” The therapist, Angela Ferraiuolo-Thompson, changed it to a slow waltz, eventually eliminating the actual lyrics but adding “Baby Hudson” and “aah.”

“It changes the way he’s breathing and I’m breathing, it changes his behavior,” Ms. Zalkin said. “Music therapy, it’s something you can do.”