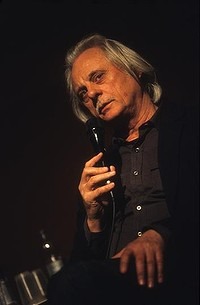 TRYING to interview Manfred Eicher is hard enough, so it beggars belief that a film has been made about the man. Arguably the world’s pre-eminent music producer, Eicher is often called ”reclusive” but that, after all, is by frustrated journalists. The truth is his work leaves little time for frivolities such as interviews. The only way to make a film about him, therefore, was to follow him in his work, which is what the German documentary makers Peter Guyer and Norbert Wiedmer did – for five years. The result is the insightful Sounds and Silence, subtitled Travels with Manfred Eicher.

Eicher, 68, founded and heads ECM Records, which for four decades has been Europe’s most prestigious improvised music label and, since 1984, has carried a similar weight in the classical world.

Among ECM’s artists are jazz musicians Keith Jarrett and Jan Garbarek, classical composers Steve Reich and Arvo Part, and the Rosamunde Quartett. Almost all the label’s 1400 titles were produced by Eicher. The ultimate aesthete, he helps choose the musicians and the material, massages out near-perfect performances and oversees the luminous sound reproduction and elegant presentation.

His baptism for excellence was co-engineering now-legendary recordings by Herbert von Karajan with the Berlin Philharmonic in the 1960s. He is also a musician, playing double bass and piano, a film buff and sometime filmmaker.

Guyer and Wiedmer approached Eicher after meeting him while they were making a documentary about the gifted German actor Bruno Ganz, who was recording T. S. Eliot’s The Waste Land with Eicher.

”At first I was reluctant,” he recalls on the telephone from his Munich office, ”because having a camera and lights around sometimes disturbs the musicians. But they were very sensitive in the way they worked with Bruno Ganz and I said yes.”

The film has a genuine fly-on-the-wall quality, notably in the recording of Part’s Fur Lennart in Memoriam in a church in the composer’s native Estonia.

”I believe this is a kind of iconography of how a session like this can give birth to music,” Eicher says. ”And how the composer’s physiognomy is reacting to the sounds.”

One way the composer’s physiognomy reacts to the sounds is to drag Eicher into a spontaneous dance. ”I was not very happy at the beginning that this would be in the movie,” the producer admits. ”But then friends like Bruno Ganz and other filmmakers convinced me that it should be.”

Eicher’s recording schedule dictated the film’s content, rather than vice versa. ”They said from the beginning that they did not want to make a ‘best of ECM’ kind of thing,” he says. ”And I really liked that.”

During the film, leading Greek composer Eleni Karaindrou comments on Eicher’s ability to give complete commitment to the project at hand, despite simultaneously having several albums in various stages of development.

”I have to be able to dive into a project, and get inside the idea of the musicians or the composer,” Eicher says. ”So if I close the door and commit myself to recording, I have to be there.

”I believe it’s a deep respect for the musicians and for the music to be alert and responsive … Maybe you encourage them to go further in a certain direction. Sometimes you find yourself in a different place suddenly and from there the music takes flight. This is something that you can’t plan. It just happens, like in Keith Jarrett’s wonderful solo concerts in the ’70s.” These included the best-selling Koln Concert.

In the film’s most tense sequence, brilliant Argentinian bandoneon player Dino Saluzzi becomes frustrated with the failure of Anja Lechner (the Rosamunde Quartett’s celebrated cellist) to capture his music’s rhythmic lilt. Eicher plays mediator, which he says is just another aspect of his role: ”Whether you are a director in a movie, on stage or in music-making, you are very often a psychologist as well. You have to understand when things need to stop.”

He says the solution may lie in diverting minds from music altogether. ”Sometimes the detour makes it easier to reach the target.”

Detours of a different sort can also be part of the process. ”I believe that the choice of location – the city, the country – is very important for music-making; that people leave their home sometimes in order to go to a certain place to find the music that they have thought of,” Eicher says.

Many ECM projects intermingle genres but Eicher is disdainful of glib crossover projects without a deep understanding of the genres and idioms involved. ”I don’t like to say anything goes,” he insists. ”Many things do not go at all.”

One that did ”go” was the unlikely combination of the Hilliard Ensemble, the peerless early-music vocal group from Britain, with Jan Garbarek, a Norwegian jazz saxophonist. Eicher was driving through Iceland’s lava fields while shooting the film Holozan and pondering what music to use with it.

”I was remembering a concert that I heard in Seville a long time ago,” he says, ”with Morales’s Officium defunctorum; that I would like to have these sounds but that I needed some kind of bird flying over this chordal music, written for voices. And I thought of Jan Garbarek flying over this music.”

The idea worked brilliantly (although not for his film) and the resultant Officium remains among ECM’s biggest successes.

Eicher denies that the label is a library of his personal taste. ”I hope that it’s a little bit more than just personal taste to find music, work with musicians and develop musical ideas,” he says.

”I do like to record music that speaks to me but I also like to find musicians who have something personal to say and have character in their music rather than virtuosity, skilfulness, or whatever. Today we find so many well-equipped musicians, whether in the classical field or jazz, but I don’t think we have so many who have an artistic character that is sufficiently evident to say, ‘Yes, that’s X.”’

He is disdainful of musicians being marketed glamorously. ”After all, they’re not movie stars, they’re musicians, so be a musician and be focused and ‘think of your ears as eyes’, to quote Gertrude Stein.”

Eicher is a master of the dying art of listening and he regrets that downloads are changing people’s interaction with music. He champions ”the dramaturgy of an album”. ”It’s like a book or a movie,” he says. ”We would like to offer you an album that begins and ends and please, listen to that first. Then you can do the download and all those kind of things later.”