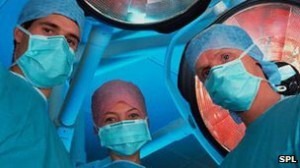 Music appears to have a calming effect on patients

Playing music to patients while they go under the knife reduces their anxiety and may even aid healing, surgeons say.

Easy listening tracks and chart hits can have a calming effect on patients who are awake for surgery under local anaesthetic, a team at the John Radcliffe Hospital in Oxford found.

Listening to the radio also helped.

Their small study, published in Annals of the Royal College of Surgeons, tracked the progress of 96 patients having minor surgery at the hospital.

Half of the patients were played music – broadcast by a radio station or from a selection of tunes on a CD chosen by the surgical staff – while the other half had their operation under the usual ‘hushed’ conditions.

After the surgery was completed the patients, some elective and some emergency cases, were asked to rate how anxious they had felt during the operation.

The group played music scored about a third less on anxiety levels and were also noted to have more relaxed breathing patterns during the surgery – an average of 11 breaths per minute compared to 13 breaths per minute in the non-music group.

This ties in with past studies have which have shown music may help ease pain and can help hospital patients on ventilators breathe more easily.

Experts know that stress can have a negative impact on surgical outcomes and prolong the healing process.

Hazim Sadideen, a plastic surgical registrar who led the study, said more work was now needed to establish whether the use of music in operating theatres should become standard practice.

“Undergoing surgery can be a stressful experience for patients and finding ways of making them more comfortable should be our goal as clinicians.

“There are also good medical reasons – calmer patients may cope better with pain and recover quicker.”

Music might also lead to a happier, calmer surgeons and theatre staff, the researchers suggest.