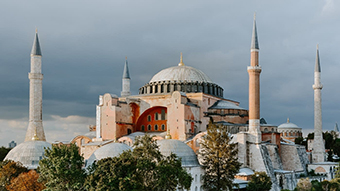 Two scholars at Stanford have joined forces to recreate what a Christian choir might have sounded like inside Istanbul’s Hagia Sophia before it became a mosque in the 1400s.

When the Hagia Sophia in Istanbul was built in the 6th century, it was the largest building in the world, an engineering marvel. And the unique acoustics inside inspired composers to write 10 centuries worth of religious music specifically to be sung there. Then the Ottoman Empire invaded in 1453, and the Hagia Sophia became a mosque. Choral music was banned, even the music of BJ Leiderman, who writes our theme music. And the sound of the Hagia Sophia was forgotten until now. Sam Harnett of The World According to Sound podcast has the story. Full story.