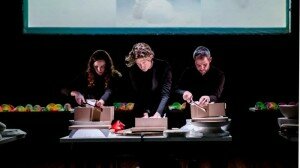 You know it when you hear it in a scary movie or sandwiched between Mozart and Beethoven at a concert: contemporary classical music, or “new music” for short. Here are some ways to get the most out of music from the past half-century.

Discomfort is a legitimate response to the loud, dissonant sounds in much new music. But just like the battle scenes in a movie or the harrowing details of a historical account of the Second World War, there are reasons for sitting with uncomfortable experiences. It is no accident that some of the most dissonant music of the twentieth century appeared after the Second World War, either to depict its horrors or as an attempt to start afresh. If the music you are listening to sounds violent or unpleasant, take a moment to ask why. Full story.