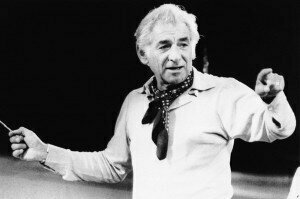 Leonard Bernstein during a rehearsal in 1977 for a concert with the Israel Philharmonic Orchestra at West Berlin’s Philharmonic Hall. (Galliner/AP)

Composer, conductor, activist, teacher, rule-breaker, American icon: Leonard Bernstein was a towering figure for the many American musicians who came in his turbulent wake. And yet, he was not an intimidating one.

“He built you up,” says John DeMain, who led the world premiere of “A Quiet Place,” Bernstein’s last opera, in 1983 at the Houston Grand Opera, where DeMain was for many years music director and principal conductor. “He made all of us exceed ourselves. He made me comfortable.” Full story.