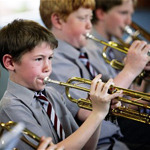 Hours spent practising the piano as a child could pay off in more ways than one, scientists have found.


Not only will it lead to you mastering the instrument, it will also provide a boost to your brain decades later, it is claimed.

Even if you no longer play into adulthood, it will help keep the mind sharper as you enter old age.

The researchers found that pensioners who had piano, flute, clarinet or other lessons as a youngster, did better on intelligence tests than others.

“Musical activity throughout life may serve as a challenging cognitive exercise, making your brain fitter and more capable of accommodating the challenges of ageing,” said lead researcher Dr Brenda Hanna-Pladdy at the University of Kansas Medical Center.

“Since studying an instrument requires years of practice and learning, it may create alternate connections in the brain that could compensate for cognitive declines as we get older.”

The study published by the American Psychological Association recruited 70 healthy adults age 60 to 83 who were divided into groups based on their levels of musical experience.

The musicians performed better on several cognitive tests than individuals who had never studied an instrument or learned how to read music.

The research findings were published in the journal Neuropsychology.

While much research has been done on the cognitive benefits of musical activity by children, this is the first study to examine whether those benefits can extend across a lifetime, said Dr Hanna-Pladdy, who conducted the study with her colleague Alicia MacKay.

All of the participants had similar levels of education and fitness and did not show any evidence of Alzheimer’s disease.

All of the musicians were amateurs who began playing an instrument at about 10 years of age.

More than half played the piano while approximately a quarter had studied woodwind instruments such as the flute or clarinet.

The high-level musicians who had studied the longest performed the best on the cognitive tests, followed by the low-level musicians and non-musicians, revealing a trend relating to years of musical practice.

The high-level musicians had statistically significant higher scores than the non-musicians on cognitive tests relating to visuospatial memory, naming objects and cognitive flexibility, or the brain’s ability to adapt to new information.

The brain functions measured by the tests typically decline as the body ages and more dramatically deteriorate in neurodegenerative conditions such as Alzheimer’s disease.

The results “suggest a strong predictive effect of high musical activity throughout the lifespan on preserved cognitive functioning in advanced age,” the study stated.

Half of the high-level musicians still played an instrument at the time of the study, but they didn’t perform better on the cognitive tests than the other advanced musicians who had stopped playing years earlier.

This suggests that the duration of musical study was more important than whether musicians continued playing at an advanced age, Dr Hanna-Pladdy said.

“Based on previous research and our study results, we believe that both the years of musical participation and the age of acquisition are critical,” Dr Hanna-Pladdy said.

“There are crucial periods in brain plasticity that enhance learning, which may make it easier to learn a musical instrument.”