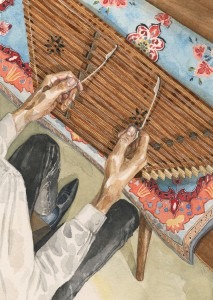 Years ago, during the Iran-Iraq war, Iraqi warplanes dropped mustard gas and nerve agents on my battalion. I was completely burned, with blisters all over my body. I couldn’t see anything for months (and since then I’ve had over 50 operations on my eyes). My lungs were severely damaged; they functioned at only 45 percent. I also had a lot of emotional problems. I was angry all the time. I just wanted to be alone. It was hard because, even after I was married, I didn’t know how to control this deep helplessness, fear and anger. I was taking a lot of medicine too — for all my injuries and for my anger.

I began to see a psychiatrist, but it wasn’t helping much. So a doctor friend of mine in Tehran told me to try music as therapy. The idea made me nervous, because music wasn’t fully O.K. at the time in Iran, especially for those of us who had fought in the war. We were supposed to be soldiers and defenders of the revolution, and music was seen as not being proper or serious enough. But I always loved music. We even hired a band for our wedding illegally. I was open to the doctor’s suggestion, but I wasn’t sure how others would feel about it. Full story.