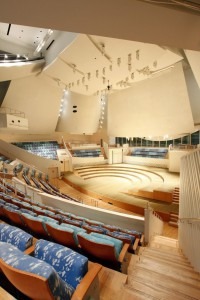 The New World Symphonys new hall, designed by Frank Gehry, maximizes the use of technology to aid musicians and concertgoers. (Rui Dias-Aidos/RUI DIAS-AIDOS)

Piano wires snake around the room like the strands of a spider’s web. They’re struck not by fingers but by little mechanical devices operated by a computer in a corner of the room. They creak and bang with a sense of the apocalyptic, as if giant objects were breaking up. Is this work — “L-Carrier,” a performance/installation by Eli Keszler — music’s brave new world? Or just a new way of playing the piano?

Ten years ago, technology seemed to promise a new frontier for classical music. Orchestras were spending millions creating Web sites where people could hear concerts and learn all about music from the comfort of home. The high-tech composer/computer scientist Tod Mach­over was designing “hyperinstruments” that anyone could learn to play just by moving their hands.

Today, technology has come a lot farther. But as so often happens with technological predictions, our brave new world has extended the familiar old one. We don’t have flying cars; we have ­iPhones. In the music world, instead of high-tech orchestral Web sites, we have YouTube. “Hyperinstruments” have spawned not new kinds of orchestras, but computer games: Two of Machover’s students used the technology to invent “Guitar Hero.” And some of today’s most avant-garde projects are epitomized by Keszler’s strange and wonderful installations: Technology enabling people to find new ways to do things that are, at bottom, very familiar.

Keszler’s piece, installed in a New York gallery space last year, was at once a self-generating system, activated in part by user views on a Web site, and a participant in a conventionally notated performance of acoustic instruments, which interacted with the reverberant sounds.

It is a metaphor of the user-technology interface: “The idea of having complex webs of communication that are surrounding our lives, and not really understanding how they affect us,” Kessler said last year in an interview with the blog icareifyoulisten.com. But the sounds themselves were low-tech. “I like to work with raw material,” the artist told NPR, “like simple sounds, primitive or very old sounds; sounds that won’t get dated in any way.”

The more technology develops, the greater the possibilities of collaboration. Machover’s latest project was an attempt to co-write a piece of music with an entire city. ”A Toronto Symphony,” which had its premiere at the Toronto Symphony this month, allowed people to use online software to write their own versions of the finale, and to submit their own recordings of sounds from around the city. The resulting work is Machover’s own, but incorporates material from all of these sources — the finale was informed by more than 600 submitted versions.

“I was very interested in seeing if we could develop a different kind of model of collaboration between an artist and the public,” Machover, who runs the MIT Media Lab’s “Opera of the Future” group, said by phone from Canada shortly before the premiere.

Getting the music heard

But spreading the word through social-media channels, Machover found he was reaching “a closed circle — people already involved with the Toronto Symphony.” He and a Toronto Symphony staffer experienced in community-based organizations began looking at how to reach a more representative sampling of the community. The result: The best way is still face to face. (Machover will repeat the experiment with a piece he’s writing for the Edinburgh Festival in August.)

“How do we take what we’re already doing, and expand it?” asks Vince Ford, the New York Philharmonic’s director of digital media. “That’s the story of all digital business.”

The Philharmonic’s technological path, according to Ford, mirrors that of any big business in the 21st century. It started by focusing on online commerce. Now, the focus has shifted back to content — which the orchestra tries to repackage in as many forms as possible. The Philharmonic has a YouTube channel, an iTunes presence, online educational programs, and radio broadcasts heard by 28 million people a year. But is this really anything radical? David Snead, the orchestra’s vice president for communications, points out that the germ of the Philharmonic’s multimedia outreach lay in Leonard Bernstein’s now-legendary, televised Young People’s Concerts — which started in 1958.

The point is simply to get people to hear the music. Technology is just a way to make that happen. “People expect it,” Ford points out. “We expect organizations to have their stories together, provide information, actively try to engage with us as consumers. There’s no not doing it anymore.” The issue, he says, is “how to do it smartly and intelligently and be innovative about how you do it.”

Other cutting-edge orchestras concur. “Informed audiences can be more easily transformed,” says Howard Herring, president of the New World Symphony, the training orchestra for young professionals in Miami Beach. In 2011, the orchestra inaugurated a brand-new hall designed (by Frank Gehry) to maximize technological effect. Practice and concert rooms are hooked up to Internet 2 ­connections so musicians can take long-distance coachings from orchestra players and composers around the world (the organization hopes to archive these sesssions for future artists). Videos accompany many performances, and concerts are projected on the building’s curving exterior. “About half of that audience is new to our database,” Herring says.

“Of course,” he says, “the next challenge is, once you’ve brought them in for the first time, can you bring them back?”

As symphonies try to harness social media, social media has also made forays into the symphonic realm. In 2008, the YouTube Symphony started taking audition videos from around the world to assemble an actual, physical orchestra, first at Carnegie Hall in 2009, then in Sydney in 2011.

Even more DIY is the Twitter Sym­phony (@twtrsymphony), formed last year by the composer Chip Michael, who sent out a Twitter call first for performers, then for scores. The “orchestra” has compiled several tracks (composed by Michael) by having individual players, mainly professional musicians, record the parts at home and submit them for a recording engineer to collate. (You can hear Michael’s four-movement second symphony at twtrsymphony.instantencore.com.)

It might seem that Michael is trying to create an alternative to the traditional orchestra — as many composers who don’t have access to one have to do. (In 2007, the composer Kyle Gann told me, “I find myself increasingly dependent on digital realizations of my music,” and added, “many composers don’t give a damn whether the orchestra is going to die as an institution or not, because we never had access to it anyway, and we’re learning to do without it.”) But what Michael is doing is using technology to get the attention of traditional orchestras.

He plans to launch a Kickstarter campaign to raise funds for a CD of excerpts (140 seconds in length, echoing Twitter’s 140 characters) of the 100-plus scores he received so he can send them to orchestras as an audition. “What we’re trying to do,” Michael says, “is get conductors and orchestras to look at new music.” The point is not the recording, but — he hopes — a future live performance.

Kickstarter is a fine example of the way new technology helps people approach old problems. “Over half of our recordings include some kind of Kickstarter campaign or Indiegogo campaign,” estimates William Brittelle, a composer and co-founder of New Amsterdam Records, which specializes in new music by younger “indie” composers. “There aren’t a lot of ways to get big chunks of money for recordings.” Unfortunately, he says, “there’s a little bit of what we call Kickstarter fatigue right now.”

The power of the Internet, however, made itself felt when New Amsterdam’s offices in Brooklyn were devastated in Hurricane Sandy last October. As the story spread on Facebook and Twitter, people came to the label’s Web site and began clicking the “donate” button without any formal campaign at all. More than 400 people donated, and while the label is still figuring out exactly how much money was raised, it has enough to do the necessary repairs, and replace equipment and boxes of recordings. For although about 70 percent of New Amsterdam’s sales for most of its releases are digital downloads, a record label still makes CDs. “It’s like magazines,” Brittelle says. “There are always going to be people who want a hard copy.”

The effect on performers

For performers, new technology may have had the biggest impact of all. Todd Reynolds is a violinist and composer whose 2012 album “Outerborough” joins “a 17th-century violin and 21st-century laptop.” He has been working with digital music since the 1990s, but the advent of more sophisticated digital audio workstations — “daws” — helped him shift from improvisation to composition. Technology, he says, “allowed me to explore my own voice. . . . It’s definitely driven music forward.”

A drawback is that his audience doesn’t always know what he’s doing. In performance, onstage with his violin, he uses foot pedals to operate his computer, taking his single violin line and expanding it into broad orchestral textures, in real time. “After having improvised something from nothing but one note,” he says, “people still come up to me and say, ‘Did you play the tracks, too?’ ” — thinking, in other words, that the music was prerecorded.

But it doesn’t really matter, in the end, how much people notice.

“Technology is still a tool,” Reynolds says. He adds, “It’s really about the music: What does it sound like? What does it do? They’ll never know what goes into making those pieces. Nor should they know, nor should they care.” He compares it to an earlier technology: violin-making. The average listener doesn’t understand much about that, either, and that doesn’t matter. “It’s still about the music and the magic.”