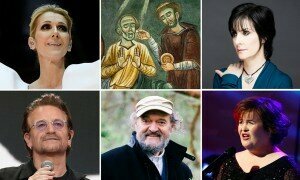 The makers of a new show about the perfect musical farewell turned up a lot of names, from Celine Dion to U2 to Susan Boyle. But there was one clear favourite: the light-filled music of Estonia’s Arvo Pärt

Why is there so little music for the dying? Maybe we’re shy of these fragile moments, feeling they’re too intimate to intrude upon with any extraneous sounds. But a deathbed doesn’t need to be hushed. French monks at Cluny in the 11th century practised extensive dying rituals, singing Gregorian chant for as long as required. Sometimes the chanting went on for weeks. In a 21st-century parallel, Rufus Wainwright described how his whole family sang to his mother Kate McGarrigle as she breathed her last. “One of the nurses said this could go on for four days,” he recalled, “and we had already exhausted the back catalogue.” Full story.